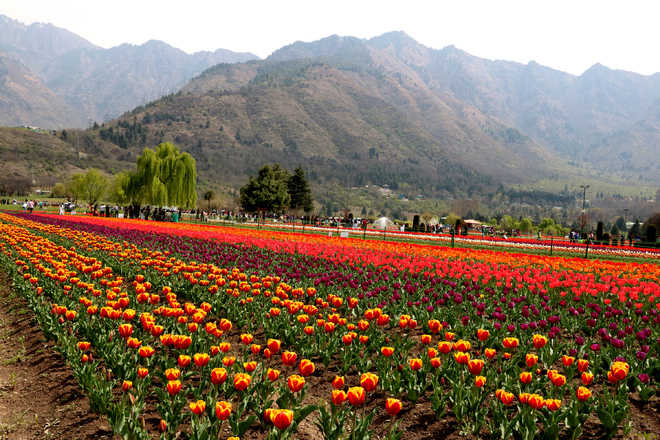 Sandwiched between Zabarwan Hills and the picturesque Dal lake, Asia's largest Tulip Garden here reverberated with music as famous singers, including rapper Badshah, mesmerised the audience with some popular numbers on Saturday at the beginning of a six-day festival.

Tulip Festival was thrown open by Jammu and Kashmir Lieutenant Governor Manoj Sinha in presence of Kerala Governor Arif Mohammad Khan at the majestic Tulip Garden, which was opened for visitors last month after two years.

Hundreds of visitors, locals as well as tourists flocked the garden on the first day of the festival amid an almost full bloom of the tulip bulbs to be part of the festival organised by the Tourism and Floriculture Departments.

The 30-hectare garden presented a colourful look as 15 lakh tulip bulbs of various colours and 62 varieties captivated the visitors.

Several singers, including those from J&K, performed some of the famous numbers, enthralling the audience. But it was singer and rapper Badshah

who stole the show. — PTI