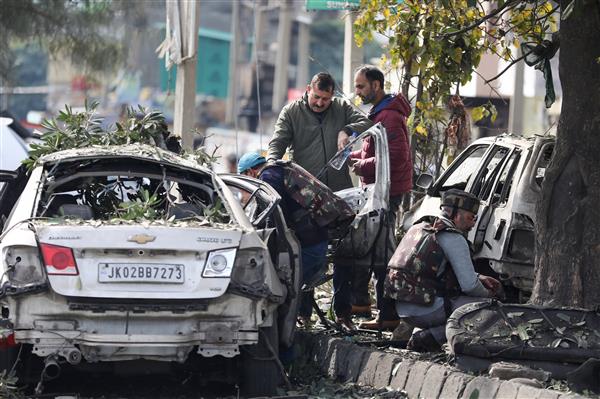 Bomb squad officials inspect the site of the blasts at Narwal in Jammu. PTI

Two blasts within a gap of about half an hour rocked Jammu today, leaving nine persons injured, the incident occurring two days ahead of Congress leader Rahul Gandhi’s ‘Bharat Jodo Yatra’ in the city and five days before Republic Day amid heightened security across the UT.

10.45 am First blast takes place in a sedan in car repair market

11.15 am Second blast, of lesser intensity, damages a jeep

Getting From bad to worse

Under the BJP rule, the situation in J&K is getting from bad to worse. Terror activities are rising with each passing day. Harsh Dev Singh, AAP

Such dastardly acts highlight desperation, cowardice of those responsible. No efforts should be spared to bring culprits to justice. Manoj Sinha, J&K L-G

The first blast took place at 10.45 am in Transport Nagar area of Narwal on the outskirts of the city. The second explosion occurred 50 metres away around 11.15 am. A massive combing operation was launched by security personnel, including from the Army, at the blast sites and nearby Narwal bypass on the Jammu-Srinagar National Highway. Forensic experts too were pressed into service. While the police remained tight-lipped about the nature of the blast, a sedan near which one of the explosions occurred was ripped apart. The other blast, said to be of lesser intensity, damaged a jeep.

J&K Lt Governor Manoj Sinha said in a statement, “Such dastardly acts highlight the desperation and cowardice of those responsible. Take immediate and firm action.

No efforts should be spared to bring the perpetrators to justice.” Top police officials, including ADGP Mukesh Singh and Deputy Inspector General Shakti Pathak, Army and teams of the State Investigation Agency and the National Investigation Agency soon rushed to the spot.

Mukesh Singh said five persons were injured in the first blast after which the area was cordoned off. “As evacuation was completed, another blast occurred,” he said.

Most of the injured included mechanics, welders and other staff of the repair shops. They were rushed to the Government Medical College and Hospital, Jammu. A senior doctor said all the nine had suffered splinter injuries and their condition was stated to be stable. The Lt Governor has announced a relief of Rs 50,000 for the injured.

The blasts were triggered at a time when security agencies in the region are on high alert in the wake of the ongoing ‘Bharat Jodo Yatra’ of the Congress and the upcoming Republic Day celebrations. The yatra entered Kathua on Thursday evening via Punjab and is camping in Chadwal, about 70 km from here.

Questions are being raised over the alleged police failure amid repeated terror attacks in Jammu division. Gajan Singh Khajuria, president of Jammu and Kashmir Transport Companies Association, who was present at the spot, questioned the policing in Jammu. “How can someone enter an area and plant two bombs amid heightened security? We have been for long asking the police to remove junked vehicles, but to no avail,” he said.

The police are learnt to be trying to ascertain whether a sticky IED was planted in the vehicles. Sources said terrorists had used a similar booby trap in the form of delayed second blast in Dhangri attack in Rajouri, which had left two children dead on January 2.