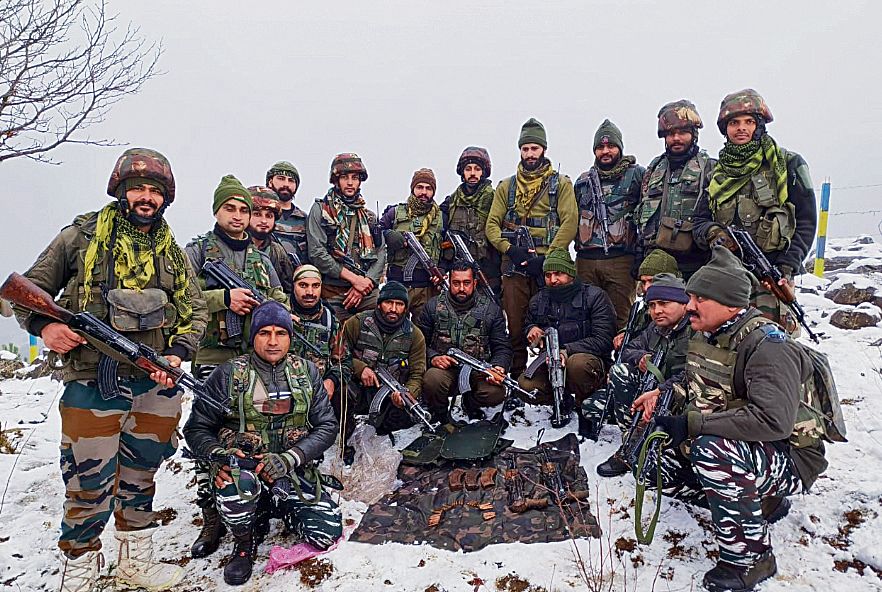 Soldiers with the seized rifles and ammunition in Ratta Jabara forest of Poonch. ANI

A week after an improvised explosive device (IED) was found in Kheora area of Rajouri district, the police have detained three suspects.

The IED was found in a tiffin box on January 18 after which panic gripped Rajouri district that had witnessed targeted killing of seven persons, including two minors, earlier this month. The police were able to detain three suspects on the basis of electronic evidences, it has been learnt.

The IED case has almost been worked out but exact details can’t be shared at this time. Three IEDs have been seized and 3 persons have been detained. Mohammad Aslam, SSP, Rajouri

One of the detainees hails from Mendhar area of Poonch district while the two others are from Rajouri district. They are being interrogated. As per reports, the suspects were in touch with a terrorist residing in Pakistan-occupied areas of J&K. It is suspected that the handler provided these devices to the suspects and had been dictating about their storage and usage.

After the January 18 incident, two more IEDs were found in Dassal village near Rajouri on January 22.

On being contacted, Rajouri SSP Mohammad Aslam said the IED recovery case had almost been worked out but exact details couldn’t be shared at this time. Three IEDs have so far been seized and three persons have been detained, he added.

In Poonch, Army men busted two terror hideouts. While one hideout was busted in Ratta Jabara forest area, the other was spotted in Dhoba forest. Arms and ammunition have been seized.

In the wake of Republic Day celebrations, the police and the Army have already stepped up security across the UT. A blanket of security has been laid across the UT, especially in Srinagar and Jammu. Lieutenant Governor Manoj Sinha will hoist the Tricolor in Jammu.

Cordon-and-search operations have been going on in different parts of the Valley in the wake of inputs regarding the presence of anti-social elements. Check-points have also been installed at different locations where vehicles are being checked. (With PTI inputs)

In the wake of Republic Day celebrations, the police and the Army have already stepped up security across the UT. Cordon-and-search operations have been going on in different parts of the Valley in the wake of inputs regarding the presence of anti-social elements.

January 18: An IED was found in Kheora area of Rajouri. Three persons are being interrogated.