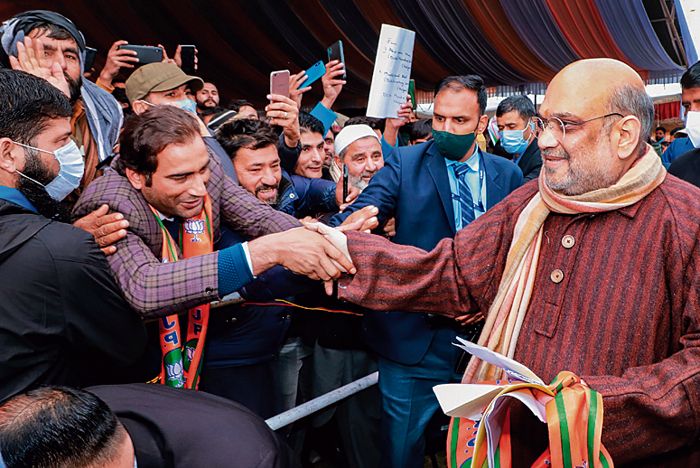 Hitting out at National Conference chief Farooq Abdullah for suggesting that an India-Pakistan dialogue should be held, Union Home Minister Amit Shah today said if at all it was necessary, he would hold talks with the people and youth of the Valley.

“Today I want to speak to you frankly, which is why there is no bulletproof shield or security here.... Farooq Sahib has suggested that I should speak with Pakistan but I will speak with the youth and people of the Valley,” Shah said in Srinagar while addressing a public gathering on the banks of the Dal Lake. On arriving at the venue, Shah had asked personnel to remove the bulletproof shield from the podium. “Why shouldn’t I talk to you? We want to talk to you, that is why I extended the hand of friendship to the youth of the Valley,” Shah added.

The Home Minister is on his maiden visit to J&K since the abrogation of Article 370 in August 2019.

Before addressing the gathering, Shah inaugurated a 500-bed hospital at Bemina (completed at a cost of Rs 115 crore), laid the foundation stones of Handwara Medical College, a ?46-crore girder bridge over the Ferozepur Nallah in Baramulla district and road projects worth 4,000 crore.

“Compare the development between this side and PoK. Do they have electricity, roads, healthcare and toilets? There is nothing (on the other side). You (Kashmiris) have the same rights as any other Indian,” he said.

Without naming the Congress, National Conference or the Peoples Democratic Party, he said while only three medical colleges were set up by the “three families which have ruled J&K”, Prime Minister Narendra Modi had ensured seven new medical colleges, which were coming up.

He went on to add that so far 40,000 people, including security personnel, militants and civilians, had been killed in J&K violence. “It is time to come out of this bloodshed and march towards development and prosperity. I promise J&K will get what it deserves by 2024 and will become one of the most prosperous places in India,” he said.

Lashing out at the NC and PDP, Shah said the leaders of these two parties never condemned those who killed civilians. “Time has gone when militants could exploit the situation. No one will be allowed to kill civilians and we assure you that peace will remain intact in J&K,” he asserted.

Union Home Minister Amit Shah extended his three-day visit to J&K. He spent the night at a CRPF camp in Pulwama and interacted with jawans over dinner.

Students and wardens of two top medical colleges in Kashmir were booked under UAPA after their videos celebrating Pakistan’s victory over India in T20 match went viral.