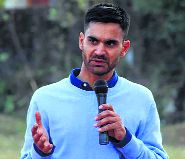 The case was registered by the Criminal Investigation, Kashmir range, which has been probing terror cases and has filed over two dozen FIRs.

Para was produced before a court in Jammu which remanded him in the police custody till January 18, the officials said, adding that he would be brought to Srinagar for questioning.

He was arrested by the NIA on November 25 in a case related to his alleged links with Hizbul Mujahideen terrorists.

PDP president and former Chief Minister Mehbooba Mufti had expressed concern over his detention and sought intervention of Lt-Governor Manoj Sinha for securing his release. — PTI