1,022 get offer letters at job fair in Dasuya 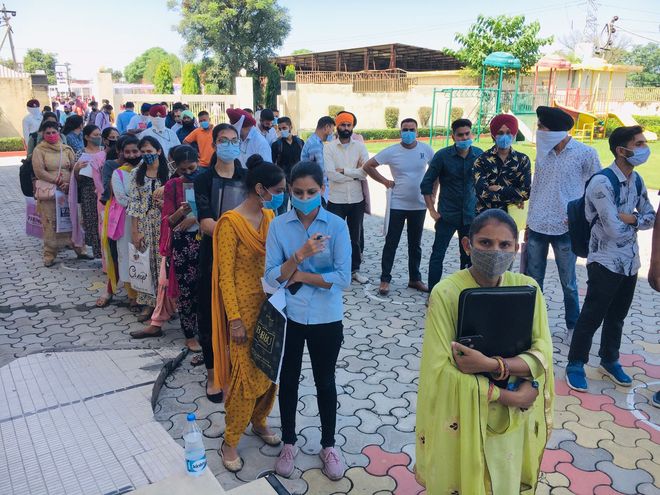 Job aspirants wait for their turn at the mega job fair on Tuesday.

The 7th State Level Mega Employment Fair was organised by the District Bureau of Employment and Enterprise on Monday at Cambridge International School, Dasuya, under the door-to-door employment drive of the Punjab Government. Various companies and organisations participated in the job fair and recruited as many as 1,022 candidates while 49 candidates were shortlisted. Over 1,700 candidates from Dasuya, Mukerian, Tanda, Talwara, Hajipur and other places participated in the job fair.

DC Apneet Riyait said the highest number of recruitment in this state level mega job fair was made by Sonalika which recruited more than 200 candidates, while 102 were recruited by ICICI Foundation, 85 by Asian Tires and SIS Security selected 46 candidates, besides eligible candidates by various other reputed companies, institutions and schools. She said a maximum salary package of Rs 3 lakh was offered in the job fair.

A similar job fair would be held on September 15 at the BDPO office, Mahilpur, and the 4th Mega Employment Fair on September 17 at the DBEE office ITI, Hoshiarpur. He said these job fairs would start at 10 am. District Employment Officer Gurmel Singh; Placement Officer Mangesh Sood; Career Counsellor Aditya Rana, were also present on the occasion. —OC

Jalandhar: The third placement camp under the mega job fair was held at CT Group of Institutions, Shahpur Campus, wherein as many as 4,415 youths got on spot job offers. Deputy Commissioner Ghanshyam Thori said a total of 4,859 candidates participated in the camp, of which 4,415 received job offers. Notably, as many as 16,000 jobs have been offered to unemployed youths during the placement camps in past one month. He further added that a total of 52 companies participated in the camp to provide youths with ample employment opportunities. Thori added that next camps will be held on September 15 and 17 at Janta College Kartarpur, and BDPO office Bhogpur. TNS