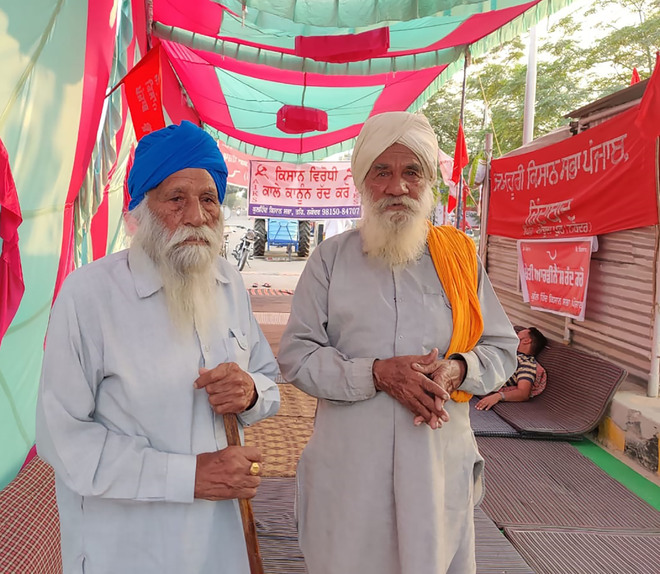 Centenarian Inder Singh (left) at a protest site in Jalandhar.

Though Inder Singh doesn’t know much in detail, he understands one thing clearly that “something is not right for agriculture today and the fight is on to save the farming community in the country”.

“My father has been a farmer his entire life. He visits such protest sites just to send out a message that farmers are not alone in their fight for their rights,” Pritam Singh, son of Inder Singh, said.

Pritam Singh recently underwent a surgery but that doesn’t deter him to extend support to thousands of farmers who have been protesting day and night against the farm laws, besides fighting their own personal problems.

Kirpal Singh from Moosapur village has a paralysed wife and a 91-year-old mother at home, but he has not missed the protest even for a day. “I am the only one to look after my family. My attention is divided. I am concerned about my mother and wife and my fields. My son lives abroad as I never wanted him to take up farming because of the current scenario. But we will fight on till we secure our community’s future,” he says.

Manwinder Singh from a Hoshiarpur village is a young farmer, who received a phone call from his relatives a few days ago that his father had suffered a heart attack. He immediately left for his home. After meeting his father, he was back to protest the next day.