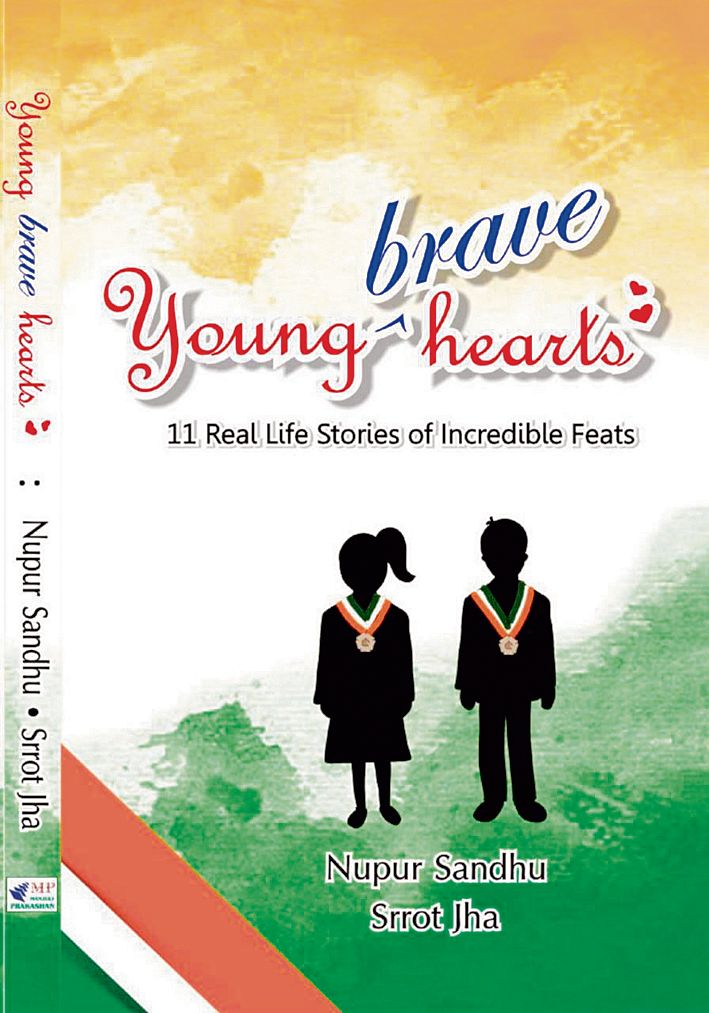 Having already penned three books, released an audio book and an anthology, city-based litterateur Nupur Sandhu says that through this work she aimed to guide the young readers on tactics to slip under from an ugly situation.

On occasion of the Independence Day, a bunch of children supported by a city-based litterateur Nupur Sandhu have come out with a book titled ‘Young Brave Hearts’ which binds 11 real life, inspirational stories of brave children.

Running a platform ‘Yayavar’ to promote literary skills among children, Sandhu says, “I am a co-author of the book which is actually by the children, of the children and for the children. The other author is my friend’s son based in Delhi Srrot Jha.”

Each of the stories has an accompanying poem written by a Jammu-based girl Esna Malhotra. “Whom I came in contact with a recently held online literary fest for the kids,” he adds. The stories have accompanying illustrations made by Ludhiana-based girl Dea Bassan. Sandhu is just someone behind the curtain. “I am basically an anchor for all of them doing more of a coordination and compilation work for them all,” she says.

A Serenity Surrender therapist (registered with Deepika Padukone’s Live Love Laugh Foundation), aiming to make kids psychologically strong, Sandhu shares that the stories include a mix of old and new ones. “The oldest is that of the first bravery award winner Harish Chandra Mehra, who was a scout and prevented Jawahar Lal Nehru’s tent from burning. The first PM of India was watching Dussehra from underneath a tent which accidentally caught fire from a fire cracker. Showing his presence of mind, the 14-year-old boy had climbed up the pole of the tent and removed the piece of burning cloth”, she shared, adding that she had narrated some stories to her co-author Jha and told him to jot these down in the simplest manner for a primary class child to read.

An Army officer’s wife based at Jalandhar Cantt here, Sandhu adds, “The stories also include my childhood bravery experience, even though I was not an awardee.”

It’s about the time she and his father, an IAF officer, shifted to national capital from Kolkata. “I was just seven and along with a group of other children, we had walked down to Janakpuri with small pocket money to make few purchases. There I got separated and was left behind with a five-year-old boy,” she says. Here comes the thriller. A stranger on his bicycle tied their hands and took them along through some lanes. “Though the place was near my house, I was not familiar with the route. All of a sudden we reached a temple where I had come a few days ago. At that point, I gathered strength, managed to free myself and my groupmate from the shackles of the stranger and ran homewards,” she narrates.

Having already penned three books, released an audio book and an anthology, Sandhu says that through this work she aimed to guide the young readers on tactics to slip under from an ugly situation. “Through stories, I have told them how shouting and raising decibles can shake the confidence of the assaulters in critical situations and help save lives. My stories are also based on the heroic acts of those who helped save others’ lives but lost their own. The children will also enjoy colouring the accompanying black and white illustrations,” she says. The book cover would be released tomorrow and the book in online and printed version would be available in the next two-three days.