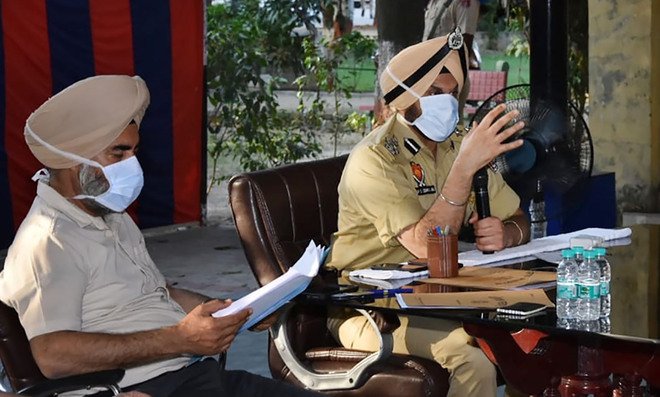 With the number of Covid-19 cases increasing at an alarming rate, the city police have intensified the drive against violators. On Tuesday night, the cops booked around 13 offenders for violating night curfew.

Moreover, 115 FIRs were registered last month, including 27 for not wearing mask, 12 for violating social distancing norm and 75 for other violations, wherein 129 accused were arrested during the same period. The police have issued 3,205 challans for not wearing mask and fine worth Rs32,05,000 had been collected, he said.

Commissioner of Police Gurpreet Singh Bhullar said safety precautions were for larger public interest and not for any individual gain aimed at saving precious lives of people from coronavirus. The CP was on a city round, where he took stock of police preparedness to effectively enforce the fresh Covid-19 curbs announced by the state government.

While going for a Facebook live at Model Town Market, the Commissioner of Police urged all citizens to strictly adhere to Covid appropriate behavior to ensure their safety from the ill-effects of virus. Bhullar said that curbs were announced for people’s safety and hence should be treated as an essential part of our lives. He said no one was allowed to take law and order in their hands as playing on these norms could take a heavy toll on all of us.

The CP further directed police officials deployed at various nakas to ensure strict action against those flouting these safety precautions adding that special focus to be laid on those not wearing masks. He said the mask was the only way to prevent virus contraction amid spike in fresh Covid-19 cases. He also asked officials to ensure enforcement of latest curbs including extension of night curfew timings by one hour (8 pm to 5 am), closure of all bars, cinema halls, gyms, spas, coaching centres and sports complexes. “Restaurants and hotels to be opened only for takeaway and home delivery from Monday to Saturday, besides banning the gatherings of more than 20 persons including for weddings/cremations,” he said.

Bhullar also mentioned that it was come to light that some people while giving sample for RT-PCR tests mentioning wrong number and address, which were making it impossible for health authorities to carry out contact tracing tasks whenever such person was reported positive. He said these persons not only putting their lives on risk but also their near ones adding that such kinds of practices to be shunned in larger public interest.