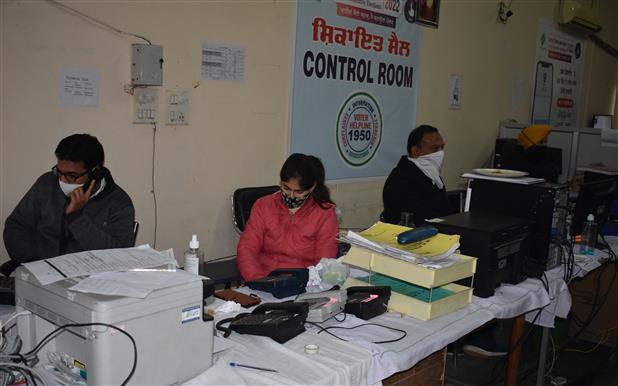 The complaint cell staff at work in Hoshiarpur on Tuesday.

As many as 144 complaints were received through cVigil App, an online complaint system based on Android platform for complaining about the violations of Model Code of Conduct (MCC) and were resolved in time. Deputy Commissioner-cum-District Electoral Officer Apneet Ryat said after the implementation of the poll code in the district, every complaint regarding election is being dealt with in a time-bound manner by the district administration. She said within five minutes after receiving a complaint on cVigil, it is handed over to the flying squad team and the team reaches the place in 15 minutes. The complaint is then forwarded to the returning officer of the constituency concerned for further action after ascertaining the facts of the complaint. The returning officer resolves the complaint within the next 50 minutes after taking action on his behalf. In this way, it is ensured that the grievance is disposed of in 100 minutes for sure. The DC said: “There were 144 complaints regarding the violation of the MCC, received through the app. All of them were disposed of well before the stipulated time. The average time taken to dispose off such complaints remained 24 minutes and 27 seconds against the permitted time limit of 100 minutes.”

The District Electoral Officer Apneet Riyait said the grievance redressal cell functioning at the district level is working day and night. She said with the implementation of poll code in the district, the election process has been expedited and its strict adherence has been ensured.