A student in California, Anoushka makes her vacation count in Hoshiarpur 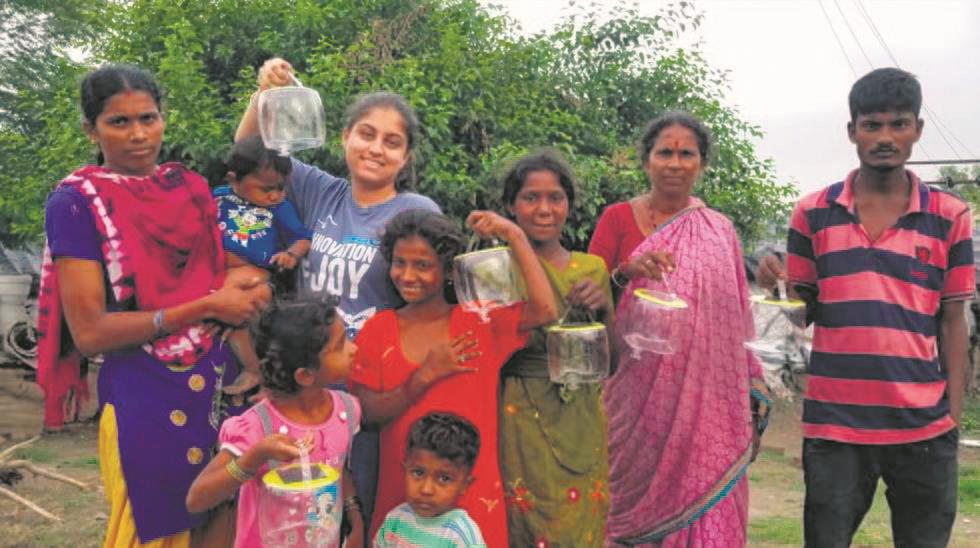 At a tender age of 17, when most of the girls of her age are considering and pursuing the options for their future and career, Anoushka Mohindra, a final year high school student in Granite Bay city in California in the USA, is thinking and doing her bit to help the economically weaker, downtrodden and slum dwellers.

She was here in Hoshiarpur for a vacation to meet her grandparents. During her stay here, she saw some slum dwellers and was shocked to see their plight and the conditions under which they were staying. She decided to do something for them. In the USA then, she raised an organisation ‘Ray of Change’ to help them. In these two years, she has contributed for a positive change in the life of more than 600 slum-dwelling families of Hoshiarpur in the form of solar lights. Her father Vikas Mohindra is an IT professional and owns an IT Company. He is in the USA since 1989 and her mother Jyotna is a physiotherapist.

How it all started

Talking to The Tribune, Anoushka said: “My family and I live in California. My both parents grew up in India. My mother is a physiotherapist and my father owns a small IT company – providing data and analytics solutions. I was born in the USA and I visited India often to meet my grandparents. So during these trips, I was able to see slum communities first hand. I used to play with the children of my grandparent’s maid. They were such wonderful and kind people, but living in such poor conditions. I wanted to extend the kindness they had given me, but I wasn’t sure how for the longest time”.

One day, during a conversation with her father regarding an article about the lack of electricity in India, she learnt that even though PM Narendra Modi promised to electrify all of India, 31 million homes were still in the dark. That stuck with her until one day, on a grocery run, something shiny caught her eye. It was a pack of solar powered lights, which she realised was a sustainable and cost-efficient solution. The idea of providing the solar lights to slum dwellers came to her mind and she talked about it to her parents and friends. She, with the help of a facilitator here, found a community interested in receiving lighting and communicated with their leader to determine when and how they could help them.

“Initially, we provided a community of underprivileged (over 100 families) with solar lighting for their homes. This has extended to about 600 families now. These solar lights increase safety and incentivises them to stay indoors during the pandemic, as their home is more lit and comfortable,” said Anoushka.

The lights were advertised as very durable, yet the first batch she sent fell apart relatively quickly, so they had to be replaced. Also, the pandemic made it difficult to raise funds for the cause, but last summer, she was able to form a small team with some other high school students to continue her fund raising efforts. “Initially, my father provided some funds – which were used to buy a small quantity of trial solar lamps/lights. Later on I trained myself to run internet campaigns, which were not very successful. Then I formed a small team of my schoolmates and we reached out to every friend and family. Due to the pandemic, we were not able to establish community support. But as the things turned normal (from the pandemic), we hope to raise funds from the community,” said Anoushka.

Her team constantly follows-up with the families who were given lights. Their organisation has a facilitator and an Asha worker helping them in the cause. They supply the data that they keep to understand how the lights help the community.

What next? “We are currently working to distribute another set of lights from the money we have raised. We are also thinking of other ways to support the underprivileged communities,” said Anoushka.