Could be a case of illegal trading of birds, say officials 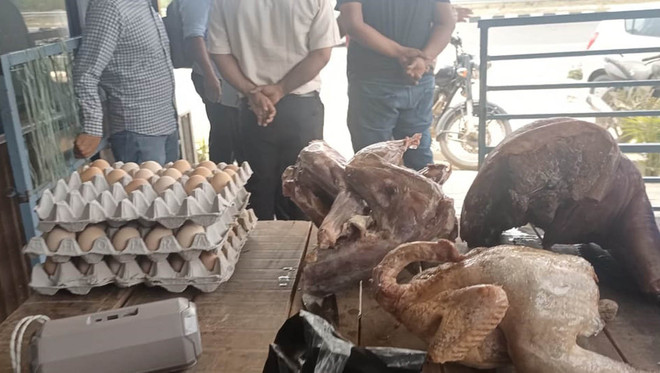 Two types of meat were seized during raid and their samples will be sent to the Wildlife Institute of Dehradun to identify the animals.

Efforts of vigilant wildlife activists on Monday led to exposing of a farm owner in Nawanshahr during a raid where as many as 19 parakeets were found along with the meat/flesh of birds. It is being alleged that illegal trading of birds was going on here.

Parbhat Bhatti, a Nangal-based bird watcher and wildlife enthusiast, said he, along with Nikhil Sengar, Wildlife Warden, Nawanshahr, had got information that the farm owner might be involved in illegal trading of birds. “After getting the information, we got in contact with the state Wildlife Department and a team was formed to conduct a raid today,” he said.

Bhatti added that when the team reached the farm, the owner was not there. “We got to know that he had sold two eagles yesterday,” he said.

Nikhil Sengar said, “We will request the Wildlife Department to take cognisance of such persons who take permits and then get involved in the illegal trading. The CM should also look into these matters.”

The activists also claimed to have found a diary from the spot where the owner has allegedly written about the number of animals and birds he has sold to date.

Divisional Forest Officer (DFO) Wildlife, Hoshiarpur, Gursharan Singh, however, said he had no information about the diary that was seized. He said if there is any diary, it will be a part of the investigation. He said he received information from the Ropar team, and he also sent his team to the spot.

Sharing the preliminary information, the DFO said, “Two types of meat have been recovered; their samples will be sent to Wildlife Institute of Dehradun to identify the animal. We will call the owner and interrogate him on the issue. He has already been booked under the Wildlife Protection Act. We will nab him and will also find out his address and phone number,” he said. Whether he was involved in illegal trading of birds or not will be cleared after investigation, officials said.