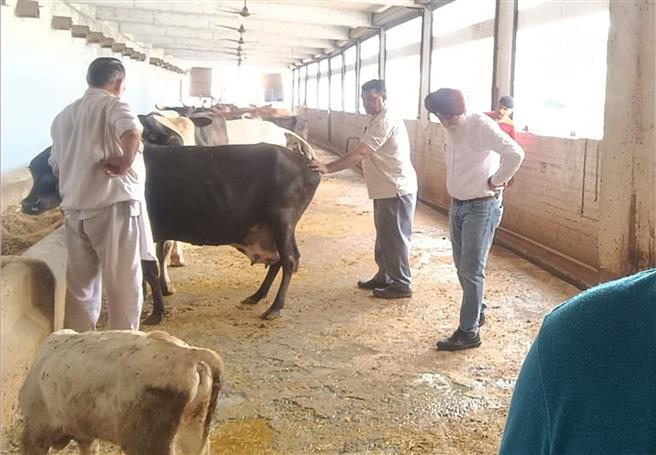 A team of the Animal Husbandry Department in Nawanshahr.

In compliance with the orders of Principal Secretary Animal Husbandry Vikas Partap to save the cattle from lumpy skin disease (LSD), teams of local animal husbandry officials have begin treating the animals in Nawanshahr district. Nearly 50 per cent of infected animals in the district have recovered after a proper treatment.

Divulging details, Dr Chander Paul Singh, Deputy Director, Animal Husbandry, said a total of 1,457 animals have been diagnosed with the disease in the district so far. To curb further spread of the disease and to sensitise the residents, as many as 19 veterinary teams have been pressed into the job, he added.

Elaborating the symptoms of the disease, Paul said the infected animal contracts LSD from capripox virus. The infected animal takes a week to get rid of this after a proper treatment of disease that starts with developing of scrabs in the centre of the nodules.This disease is spread by flies, mosquitoes and ticks, the Deputy Director said and cautioned all cattle owners to keep the place of animals neat and clean these days.

He said the department teams had vaccinated as many as 1,599 healthy animals to save them from falling prey to the LSD.