Nothing more can be asked from hockey players, says coach Avtar Singh 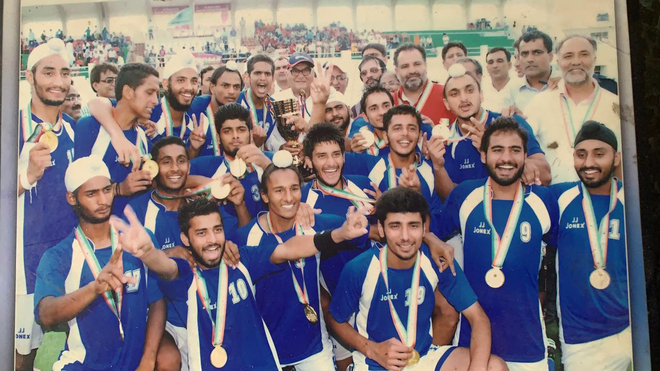 Avtar Singh (extreme right), one of the first coaches at Surjit Hockey Stadium with the players when they won junior championship. - File photo

Although the Indian hockey team lost to Belgium (5-2) in the semis of the 2020 Tokyo Olympics today, the players have won millions of hearts back home. Now, the Indian men hockey team will take on Germany for a bronze medal on August 5.

Avtar Singh (59), one of the first coaches at Surjit Hockey Stadium, talks about the journey of players. Before he joined as a coach in 2008, he was master chief electrical radio (MCELR) in the Indian Navy. He was also a member of Navy hockey team.

Avtar has trained several players who have left their mark at various international arenas. He said, “My players have made me proud and I am so glad. What else I want? They were kids when they took admission here. I knew that they are going to make it big one day.”

The coach said budding players came to him at the age of 15 to 16. “When players were young, they were only eyeing jobs, but playing at the Tokyo Olympics is a great achievement,” he said.

He also talked about Hardik Singh, whose magical goal, sealed India’s win against Great Britain on August 1. Hardik had also taken training at the stadium. “I was impressed by his technical expertise at such a young age,” said the coach.

Avtar said along with him, coach Gurdev Singh and physical trainer Jaspreet Singh, guided the boys.