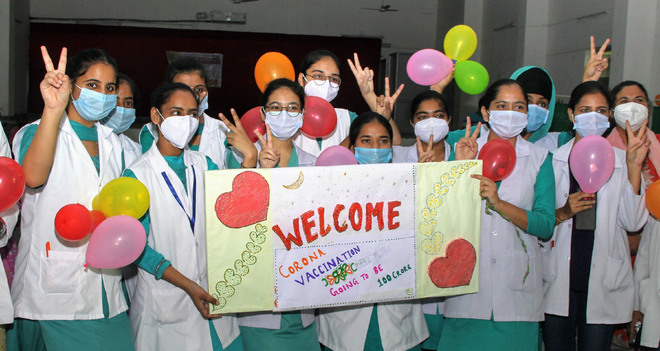 Members of the Health Department celebrate the success in Jalandhar on Wednesday. Malkiat Singh

Nine months after the vaccination programme took off in the district, Covid vaccine has been administered to over 20 lakh people.

Releasing vaccine numbers today, Deputy Commissioner Ghanshyam Thori exhorted people to come forward for the second dose of the vaccine to complete their course and ensure their safety from the virus.

Notably, of the total 20,00,560 people, who were administered vaccine, 1,70,000 received Covaxin while the rest got the Covishield jab. Notably, vaccination drive is on at 100 sites in the district depending on demand. Covaxin is being regularly administered at two sites, including Garha and Maqsoodan.

“Vaccine drive is getting a rousing response in the city. Many people are turning up at designated sites to get jabbed against virus. On an average 10,000 to 20,000 beneficiaries are getting vaccinated every day. The number of people receiving their second dose is expected to increase as the supply of vaccine has been streamlined,” said Thori.

The District Immunisation Officer, Dr Rakesh Chopra said, “Majority of population in the district has been covered under the vaccination drive. Most people are now coming for their second jab against virus.”

“Today, 8,036 people were vaccinated. Of these, first dose was administered to 5,000 beneficiaries and second to 3,000. Sixty per cent beneficiaries are coming for the second jab and 40 per cent for the first dose,” Dr Chopra added.

“Majority of those turning up at the two vaccination sites are coming for their second dose of Covaxin,” said Dr Chopra. Notably, in an impressive vaccination drive elderly and physically challenged were vaccinated on the doorstep in the district.

Two new Covid cases were reported in Jalandhar district on Wednesday. The total tally of cases in district stands at 63,345. No new Covid death was reported in the district today. The death toll remains at 1,495. The number of patients, who recovered from Covid is 61,832 while there are 18 active cases in Jalandhar district. Of the 1,69,6782 samples collected in the district so far, 1,56,3239 have tested negative.