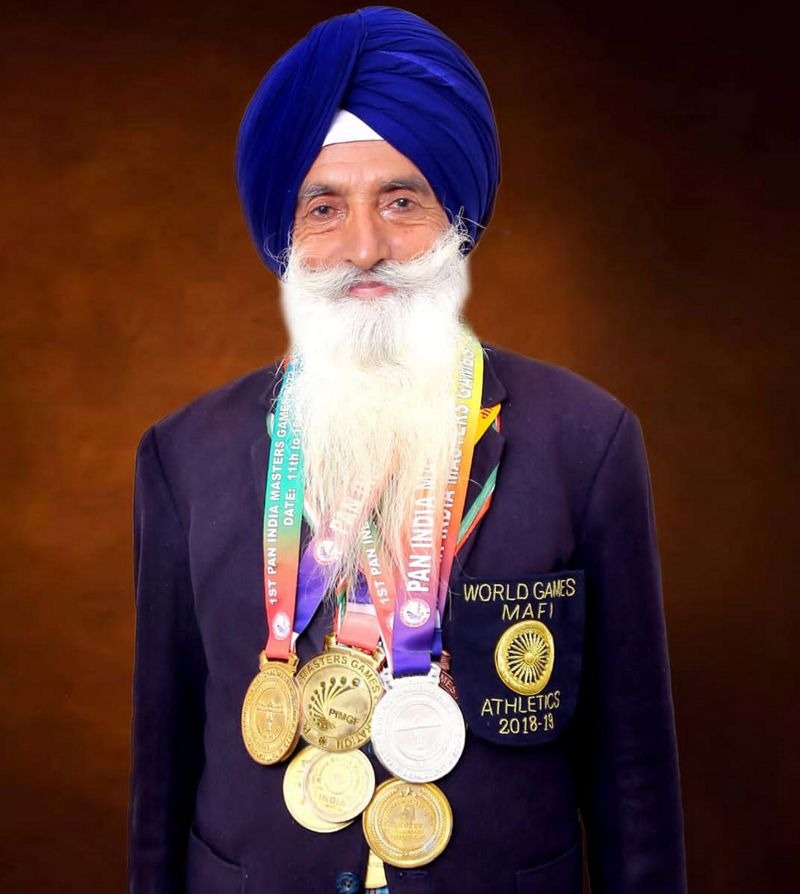 A 70-year-old man, Rabinder Singh Clair, participated in the “Khedan Vatan Punjab Dean” games under the category of people aged above 40 years in Nawanshahr on Saturday. He also won two gold medals in 1,500 m and 5,000 m race.

A 70-year-old man, Rabinder Singh Clair, participated in the “Khedan Vatan Punjab Dean” games under the category of people aged above 40 years in Nawanshahr on Saturday. He also won two gold medals in 1,500 m and 5,000 m race.

I run for 8 km every day. My day isn’t complete without a morning and evening run. I can run up to 21 km or more in a day. But the 8-km run per day is mandatory. Except for cooking, I do all other daily chores myself. Rabinder Singh Clair, athlete

Winner of 223 medals (82 gold, 60 bronze and 81 silver), Rabinder looks like a sage and runs like a young man. Hailing from Sarhal Qazian village in SBS Nagar (Nawanshahr), he runs for 8 km daily and also gives coaching to village and city children in athletics.

In 2018, he won the World Athletics Championship for those aged between 30 and 100 at the US. He has also competed in other international games at the US and Singapore and also plays for the Punjab Veteran Association.

A retired sugar mill workers, his youth has been marked by a slew of sporting events, including a gap of some years in between.

While he took a break for some months after the demise of his wife, he resumed playing in 2007. Since then, he has been playing regularly.

On why he chose the block-level games when he had won medals in international tourneys, he said: “Showing up is important. One goes to upper levels gradually. Sport is a necessary part of life and must be adopted for a healthy life.”

He said: “I seek inspiration from Waheguru. I’m a Sikh and God’s blessings have also been with me.” He says his wife, an MA, BEd in Punjabi, had been his constant support. After her demise due to cancer some years ago, it was a relatively tough going from him. His daughter also got married in 2010.

“After my wife’s demise, it took me eight months to get back to life. I resumed playing in 2007. Since then, I have been playing constantly.”