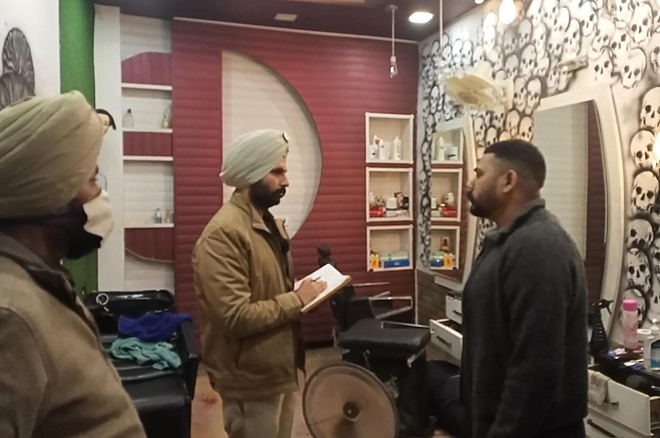 Cops carry out probe at the Adampur salon. Tribune photo

The police have booked six persons for killing a 24-year- old youth at a salon in Adampur and grievously injuring another person on Wednesday.

Two men wearing masks entered the salon while one of their accomplices waited outside on a motorcycle. The duo started confirming names and as soon as Sagar revealed his identity, the duo fired at him. After the incident, the accused fled from the spot with their accomplice.

Revolver used by the accused to commit the crime fell on the road outside the salon as they tried to escape from the spot. The police have said gang rivalry may be the reason behind the incident.

An FIR has been registered against Simar, a resident of Haripur, Sheepa and Tanna, both residents of Jandu Saingha, and their three unidentified accomplices under Section 302 of the IPC at Adampur police station.

Adampur Deputy Superintedent of Police Harinder Singh said, “A case had been lodged against Sagar in 2019 for thrashing Simar and his associates. This incident is a fallout of an old rivalry. Only two men entered the salon and their accomplices were waiting outside on two bikes. Another motorcycle can also been seen near the spot in in CCTV footage.”

Adampur Station House Officer said, “Sagar was shot on head and he died on the spot. Sunil is receiving treatment. Last year, Simar and his friends were attacked and an FIR was also registered. Simar was among those who shot Sagar.” He said out of six people, only two went inside the salon while others kept waiting outside. Body of the deceased has been sent to the Civil Hospital. The police are scrutinising CCTV footage.