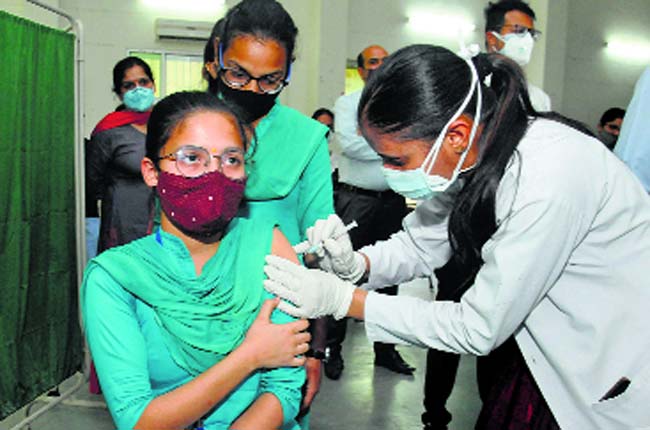 A nursing student gets the first dose of Covid vaccine at the Civil Hospital in Jalandhar. Photo: Malkiat Singh

With 25.9 per cent of the total population in the district vaccinated till June 11, Jalandhar ranks fifth among all districts of the state in terms of vaccine coverage. However, in the 18 to 44 category, only 42,815 persons have been vaccinated in Jalandhar so far. Notably, the 18 to 44 age group amounts to nearly 50 per cent of the district population.

As many as 1,000 paid slots of Covaxin were booked in an hour. But the demand slowed down for the subsequent shots. We had anticipated 5,000 to 6,000 slots will be taken. But due to the slow pace of bookings later, in total only 3,000 slots have been taken so far.

With a handful of sites offering jabs for 18 plus category - the district currently has only about 14,000 vaccines for the said age group.

With roughly 5,000 to 6,000 vaccines being administered in the district per day, about 1,000 to 1,200 are getting vaccinated with Covaxin, while the rest are getting Covishield shots. At this rate, the present supply will also be exhausted in a few days.

Notably, due to erratic supply and lack of demand, two of the three session sites started for paid vaccines for the 18 to 44 age group were also closed recently. Currently, only one operates.

DC Ghanshyam Thori said, “As many as 1,000 paid slots of Covaxin were booked in an hour. But the demand slowed down for the subsequent shots. We anticipated that 5,000 to 6,000 slots will be taken. But due to the slow place of bookings later, in total only 3,000 slots have been taken so far. Of the three session sites for which the slots had been started, two have closed due to lack of demand and the remaining one (Lyallpur Khalsa College) is only run from Sunday to Sunday. So we have a backup of about 200 vaccine for tomorrow and as many for the coming Sunday on June 20. We plan to extend the programme only till June 20.”

Rakesh Chopra, district immunisation officer, said, “Of nearly 4 lakh persons in the 45-plus category, at least 75 per cent, have been vaccinated in the district. The issue with the 18 plus population is that the phase started late and we have been moving step-wise. We are vaccinating as per availability. A majority of the 18 to 45 category has been vaccinated with Covishield. About 35,000 doses of Covaxin received from the Centre have been administered. Total 8,500 Covaxin doses were received from the state, of which 4,500 have been administered. We have received about 12,000 doses of Covishield from yesterday and about 1,000 doses of Covaxin. These will now be administered to the 18 plus category from tomorrow.”

Hoshiarpur: Hoshiarpur Deputy Commissioner Apneet Riyait on Saturday said under a special initiative, divyangs could get vaccinated at drive-through centres at a dispensary in Nehar Colony on every Wednesday and Saturday from 10 am to 1 pm. The health teams would administer doses to them in their vehicles on priority. Also, bedridden patients can avail doorstep vaccination facility by sending a WhatsApp message at 78146-40600 and mobile teams of the Health Department would inoculate them at their doorstep. She said similar practice would be started at other session sites as soon the requisite numbers of vaccine were received. OC