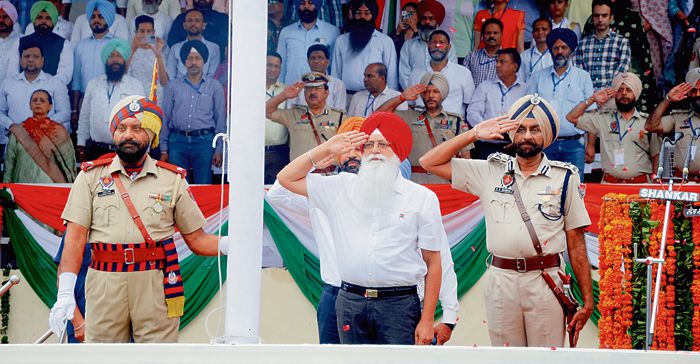 Local Government Minister Dr Inderbir Singh Nijjar on Monday hoisted the national flag at Guru Gobind Singh Stadium here and said his government would fulfil all pending commitments in due course of time.

Listing out achievements of his government, the minister claimed in just five months, a number of historic decisions, including ‘one MLA, one pension’, had been taken. He said the ‘Anti-corruption Action Line’ started by the government was a landmark decision to check corrupt practices. The decision to convert government schools into ‘schools of eminence’ will also be a major reform in education as well as overall development of students, said the minister. He stressed 19 new industrial training institutes would be set up to make skilled youngsters help set up their own ventures. He said the Shaheed Bhagat Singh Hariawal campaign should also be encouraged under which 50,000 saplings would be planted in each constituency across the state.

Announcing that 25,000 houses will be constructed for weaker sections, Dr Nijjar said these houses would improve living standards of poverty-stricken families. The minister said recruitment process had already been initiated to fill 26,000 vacant posts. He said the home delivery of wheat flour was also being started, which would provide benefit of the scheme to 1.58 crore beneficiaries.

The minister said the state government would kick-start ‘Rural Sports Melas’ from August 29 to tap into sports potential in villages. Dr Nijjar pointed out that the 600 free electricity units to domestic consumers would provide a major succour to many families. The plying of buses from across Punjab to Delhi Airport had also benefitted the Punjabi Diaspora, he said.