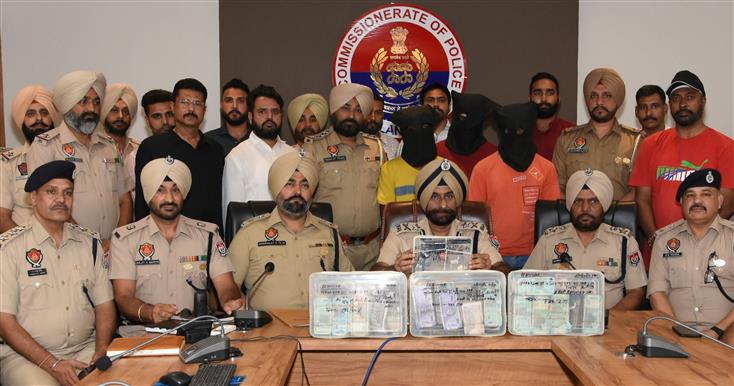 The Commissioner of Police addresses the media. Photos: Malkiat Singh

With the arrest of three persons, the city police today claimed to have cracked the UCO bank-robbery case in which Rs 13.84 lakh and gold ornaments of a woman employee were looted by some armed robbers on August 4.

The accused have been identified as Vinay Tiwari (21) and Ajaipal Nihang (32) of Uttam Nagar in Basti Sheikh, Tarun Nahar (24) of Kot Mohalla in the Basti area and Gurpreet Singh, alias Gopi, of Uttam Nagar. While Vinay, Ajaipal and Tarun were arrested, Gurpreet is still at large.

The incident occurred in UCO Bank located at Sodal near the Industrial Area where armed robbers struck at 3.05 pm and held the staff and visitors hostage. They decamped with Rs 13.84 lakh from the cashier’s cabin and gold ornaments of a woman staff. They had covered their faces and were armed with a pistol, the bank officials had told the police.

No security guard was present inside the branch and neither was there any provision of emergency siren.

Speaking to Jalandhar Tribune, the DCP said the modus operandi of the robbers indicated that the accused could be natives of adjoining areas, therefore they collected over 500 CCTV footage from different areas and roads, through which they gathered some leads.

He further said accused Gurpreet and Ajaipal were habitual offenders. “They are facing several criminal cases in various police stations of Jalandhar city and rural areas. In some cases, they have also been declared proclaimed offenders,” he said. The accused have confessed to hatching the bank robbery conspiracy at Ajaipal’s house and further investigations are underway, said the police.