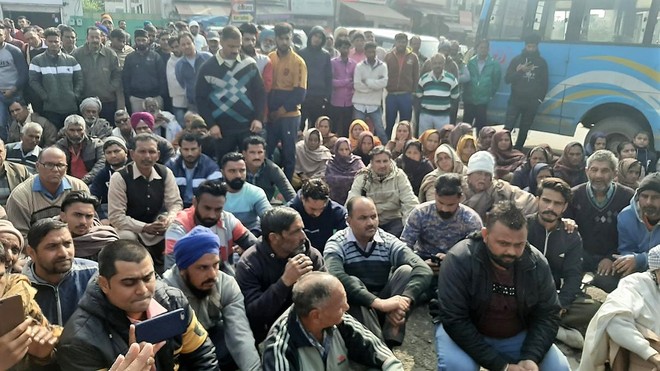 Residents and kin of the victim hold a protest at Banga Chowk in Garhshankar on Saturday. Tribune photo

Three days after the murder of a youth of Sekhowal village, Davinder Pratap Singh, alias Bunty, the police claimed to have arrested three main suspects.

Despite the police arresting three of the 15 suspects, family members and residents demanded to arrest the remaining suspects. The family members, along with residents of the village, again blocked the traffic at Banga Chowk here on Saturday and raised slogans against the state government and the police.

After two hours, DSP (D) Rakesh Kumar succeeded to persuade protesters to remove the blockade. They threatened that if all suspects would not be arrested till Monday, a protest would be held on the road along with the body of the deceased. They alleged that the police were not deliberately arresting suspect sarpanch Darshan Lal under political pressure. After the two-hour protest, DSP (D) Rakesh Kumar sought time from them to arrest all suspects in the case. Later, the protesters finally gave time till Monday morning and said the victim’s body would not be cremated till the arrest of all suspects.

People blocked the chowk and expressed resentment for not arresting all suspects in the case even after three days. They alleged that the police were working under political pressure.

Garhshankar DSP Satish Kumar and SHO Balwinder Singh while trying to persuade people to remove the blockade said the main suspects Ajay Kumar and Lucky, residents of Sekhowal, and Gurmukh Singh, a resident of Bhanuha, had been arrested and other suspects would be arrested soon, for which the police were conducting raids.

According to the police, of the 15 suspects booked in the case, the police have arrested the main three suspects late on Friday night on a tip-off from near Haro da Poa. SHO Balwinder Singh said Ajay Kumar, Lucky and Gurmukh Singh had been produced in a court and taken on a five-day remand. They would be interrogated about weapons used in the crime and information about unidentified killers.