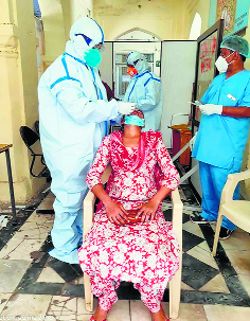 Three more people died of Covid-19 in the district on Wednesday, taking the toll to 71.

Three more people died of Covid-19 in the district on Wednesday, taking the toll to 71. Of these, two people, aged 60 and 63 (residents of Kishanpura and Basti Sheikh) died at a private hospital in Jalandhar, while one aged mere 36 years died in Amritsar. Meanwhile, eight PAP personnel were among the 100 new cases reported in the district on Wednesday, taking the tally of positive cases to 2,709 in the district. This includes cases from areas such as Khurla Kingra, PAP, Jamsher Khas, Nakodar, Ravidasspura, Bhogpur, Bhargo Camp, Sarai Khas, Model Town, Kot Bhahadur Khan, Raja Garden, Basti Nau, Chandan Nagar, Kartarpur, Bajwa Kalan and Dilabagh Nagar extension among others.

Policeman among 8 positive in Hoshiarpur

The reports of 266 samples were received in the district on Wednesday, of which eight persons have been found to be corona positive taking the count of positive patients to 601 in the district. Civil Surgeon Dr Jasbir Singh said four cases, including a policeman and two bank personnel from Hoshiarpur city, were found positive on Wednesday. Of these, one case is from Model Colony, two from Shalimar Nagar and one from Preet Nagar. Apart from this, one case each is from Kokowal village, Bahibal Manjh, Talwara and Sheeh Chatial village. New samples of 445 persons with suspected flu-like symptoms were taken in the district on Wednesday, taking the total sample count to 30,140 in the district. As per the reports, 28,684 were negative, while 852 reports were still awaited and 55 samples were invalid. The number of active cases in the district is 64, while the number of patients who have been cured is 520 and the number of deaths is 17. OC