Rs 38L looted from bank in Kapurthala : The Tribune India 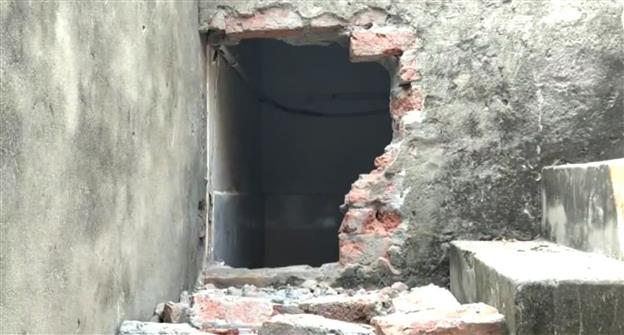 In a daring robbery committed in the wee hours on Thursday, unidentified persons struck at the Axis Bank branch at Bhawanipur in Kapurthala and decamped with Rs 38 lakh.

The police said the robbery took place between 1 am and 4 am on Thursday. With no CCTV cameras in the bank and no security personnel on duty at the night, the robbers had sufficient time to carry out the robbery.

The robbers made way into the bank by breaking the wall and layers of the bank’s safe were also cut from the top with the help of cutters to take the money.

An FIR has been lodged against unidentified persons under Sections 457 and 380 of the IPC at the Fattu Dhinga police station in Kapurthala.

With no CCTV cameras in the bank and no security guard on duty at night, robbers had ample time to carry out the robbery. The front portion of the bank remained untouched.

The police said the robbers first entered a bike repair shop after removing the exhaust fan in the washroom of the shop, which is located adjacent to the bank. Cops said the burglars entered the bank by breaking through the wall of the bank. The bank’s safe was then cut open with cutters and cash was looted from it, cops said.

The police said Rs 10 lakh were found inside the safe as it appears that the robbers were unable to reach that part.

However, it took hours before the robbery could be reported due to lack of CCTV cameras or a guard.

It was only when the officials at the bank came for duty at 9.30 am that the robbery was finally reported.

Kapurthala Senior Superintendent of police Navneet Singh Bains said, “There were no CCTV cameras at the bank. The bank officials reported the robbery in the morning. Various people are suspected to be involved in the crime. The police are conducting a detailed investigation. We are verifying any nearby CCTV footage. We are hopeful to gain significant leads soon.”