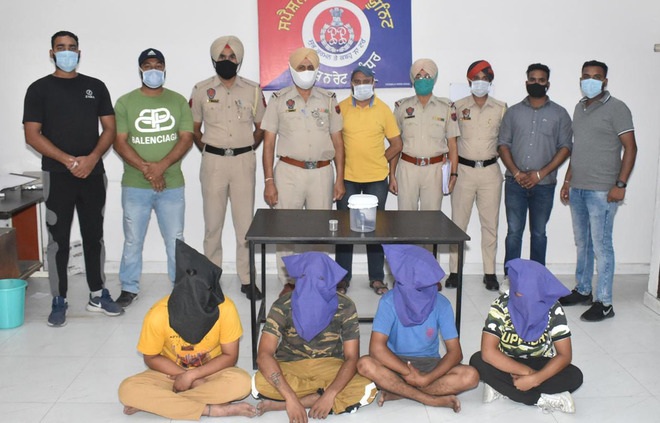 Four alleged accused in the custody of the police in Jalandhar on Friday. Tribune photo

Four days after the murder of a shopkeeper, Sachin Jain (32), in the Sodal Road area, the Jalandhar Commissionerate Police on Friday apprehended the remaining four accused. Besides, the weapon used in the murder was recently brought from Madhya Pradesh by Raman Kumar, alias Sai.

He said culprits Arshdeep Singh and Sahil were arrested from Lamba Pind Chowk whereas Darshan and Raman were nabbed by a police team near a Verka milk plant. Bhullar mentioned that Wadda Preet had already been booked in five cases in Jalandhar and Kapurthala and was wanted in one case registered at police division No.2. Accused Darshan Lal was also wanted in two separate cases registered at the Bhargo Camp police station. Two criminal cases had already been registered against accused Raman Kumar Sai at the Bhargo Camp and Basti Bawa Khel police stations.

The Commissioner of Police said the police had got three-day remand of Wadda Preet to get into the bottom of the case, besides recovering the bikes used in the crime. He said the charge-sheet would be filed against the accused as early as possible so that justice could be ensured at the earliest.