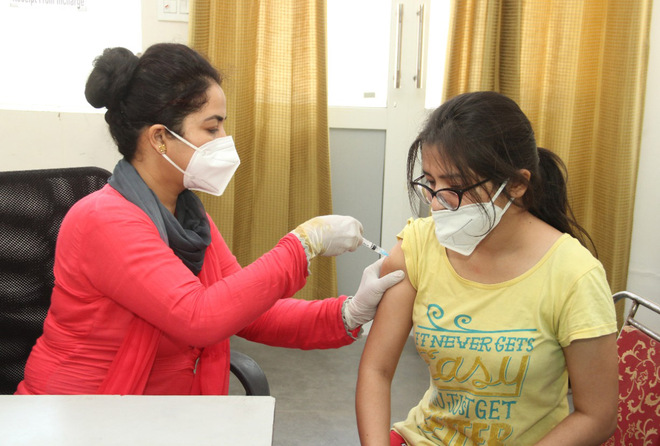 A resident gets a Covid jab at a vaccination camp in Jalandhar.

The authorities reported four Covid-19 related deaths in the district today. The toll has reached 1,441. As many as 59,454 people have recovered from Covid while the number of active cases stands at 1,095 in the district.

The health authorities reported 13 Covid cases in Nawanshahr district on Sunday. With this, the tally has increased to 11,288. The authorities reported two deaths in the district today. The deceased have been identified as a 75-year-old man from Rahon and a 57-year-old man from Muzaffarpur. At present, the district has 166 active cases and 134 patients were under home isolation. The number of recovered cases is 10,784. Urban Nawanshahr, urban Banga, Mukandpur, Muzaffarpur and Saroya blocks did not report any new case.

With 85 persons testing positive for Covid, the tally reached 29,910 on Sunday. Not only this, two deaths were also reported, taking the toll to 946 in the district. The number of active cases is 660, while the number of patients who have recovered is 28,304.

The state government has extended the vaccination drive to cover elected representatives, shopkeepers, hospitality industry and drivers, among others, to boost the economy. The administration today informed that shopkeepers and their staff, indsutrial workers and vendors should get vaccinated.

Kapurthala Deputy Commissioner Deepti Uppal said the vaccine was being administered at 29 session sites in the district. She said shopkeepers and their staff can get themselves vaccinated.