Likely to be thrown open to traffic after 2 weeks 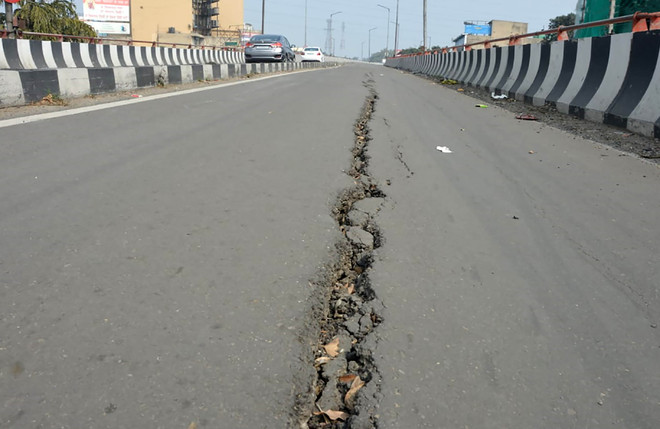 Cracks had appeared on the approach road of the flyover while going towards Apeejay College, on February 9, after which it had to be closed. Tribune photo

It is being estimated that the repair work undertaken by the company on the bulge that appeared on the sides of the approach road falling towards Apeejay School will take about 10 days. The company, it is learnt, has agreed to undertake the repair works without seeking any amount from the Municipal Corporation despite the fact that the defect liability period for the flyover had already got over. As the work would be started, the traffic on the service lanes too will have to be diverted till the time the work is completed.

It has been decided that once the company finishes repairing the bulge and fixes the protruding tiles of the retaining walls of the flyover, the Municipal Corporation will relay the road over the flyover to make it motorable again. The whole repair process is expected to take about two weeks to make the flyover functional again.

Cracks had appeared on the approach road of the flyover while going towards Apeejay College, on February 9, after which it had to be closed. For over three weeks, the officials of Jalandhar Improvement Trust, who got the bridge constructed in 2011, and the Municipal Corporation kept on shifting the onus of maintenance on each other. While the MC officials had said they could not find the record pertaining to the handover of its maintenance to it, the JIT had finally on February 26 produced copies of the same and handed over the baton the MC officials. JIT Chairman Daljit Singh Ahluwalia had shown documents wherein the maintenance of flyover had been handed over to the MC since 2012 onwards.

As the matter got finally resolved, the action plan for repairs has finally been initiated. MC Commissioner Karnesh Sharma said, “The technical experts from the company who checked the site have told us that the condition of the bridge is as good as it was 10 years ago when it got constructed. They have told us that the crack could have appeared perhaps because of some seepage of rainwater into the base of the approach road. There is also a possibility of choking of the internal drainage system. So, while they will repair it, they will resolve all issues and put things back in proper order. Getting it done from the company that constructed it was the best way out and through our talks we managed to get it done for no additional charges.”

Asked if the company had also given a report that the MC had initially sought after inspection of the flyover, the Commissioner said no such report was required as the site visits had been properly done and repair work too would be done from tomorrow.