A martial arts trainer, she took it as a challenge; SSP honours her for exemplary courage 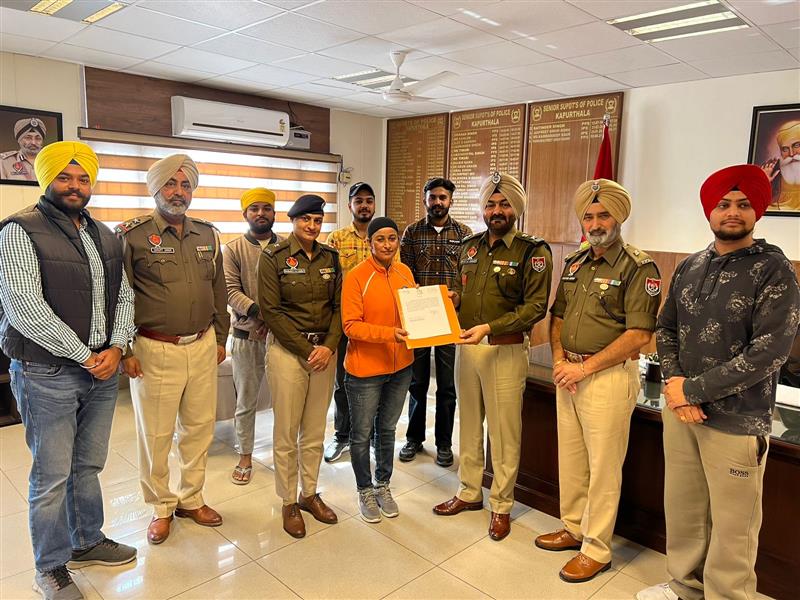 Showing exemplary courage and grit, a 40-year-old woman of Sultanpur Lodhi on Thursday did not just locate the two-bike borne masked youth who snatched her mother’s phone, but also went on to chase them over several kilometres on her scooter before finally being able to catch hold of them.

Gurvinder Kaur, who showed her exceptional bravery, is the district chief of the Gatka Federation of India. She has been imparting training in martial arts for the past nearly 22 years and is even a senior referee. She even faced a minor attack last evening before managing to overpower them.

In recognition of her courageous act, Kapurthala SSP Harkamalpreet Singh Khakh felicitated the brave girl with a commendation certificate. Khakh invited Gurvinder Kaur, along with her parents, over a cup of tea in his office and praised her valour. “Gurvinder has become an idol for other girls. The district stands proud of her. I will recommend that her name be included in the list of awardees on the occasion of coming Republic Day function,” he said.

For 22 years, I have been training young boys and girls to be ready to face any adverse situation. The incident left me aghast. I was deeply shaken when I saw how my mother had been pushed by the snatchers. I did not marry and chose to take care of my parents all my life. I felt that I would not be able to face my trainees ever again had I lost this battle against the snatchers. But having remained triumphant, I feel I have emerged more strong physically & mentally. —Gurvinder Kaur, District chief of the Gatka Federation of India

Sharing the sequence of events, Gurwinder said: “My mother was alone at our place in Satrangada locality on Thursday afternoon. She was sitting in her verandah when a youth entered the house, pushed her back and snatched her phone. The incident occurred at 1:18 pm and my mother called me from another phone just five minutes later. Since I serve in a gatka academy run by Baba Balbir Singh Seechewal, I was away but reached home soon after the call.”

Showing her presence of mind, she said she wasted no time and asked her brother’s family living next door to quickly take down the CCTV footage. “I even asked other residents in the locality to provide as many video clips as possible. I quickly gathered them all and uploaded them in all my WhatsApp groups of gatka teams, city residents etc. They all started giving me some clues from the footage. Soon after, I received a call that the miscreants had been spotted outside Government Senior Secondary School, Sultanpur Lodhi, wearing the same jackets and caps but a changed bike,” she said.

Gurwinder said she had already informed the police by then, showed them recording and even provided them her mother’s statement. “As soon as I got the clue, we informed the police while going onto chase them ourselves so that no time is lost. Some young boys, who are my trainees, accompanied me in the chase. The snatchers soon realised that they were being followed and tried to speed up but we too spread out our network and used smartness by following different routes and were finally able to catch them outside Gurdwara Hatt Sahib,” she said.

The braveheart said: “They managed to gherao them and I held one of them with his scarf. They gave up as the community joined us till the police teams also reached there in some time. The next challenge was that even after checking, we found that they did not possess the phone that they had snatched. We asked the cops to help us trace the phone. I was a little touchy about getting it back as it had the last videos of my father, who passed away recently. We finally tracked the phone from a woman in Rural Area Chandigarh Colony. Unfortunately, they had damaged its SIM and cleared all data. But we matched with EMI number. It is still with the police as the crime evidence.”