Were hiding on the roof, all children being shifted to shelter homes 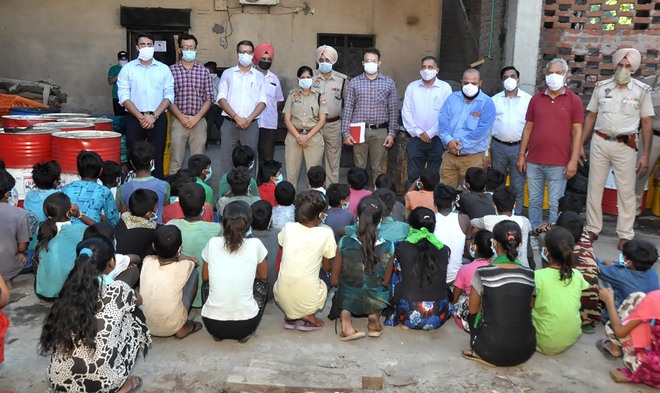 The 47 children who were rescued from two factories at Wariana Leather Complex in Jalandhar.

The Jalandhar Commissionerate police on Thursday rescued 47 child labourers, including 13 girls, from JK Rubbers Industry Private Limited and JK Polymer Industry at Wariana leather complex on the Jalandhar-Kapurthala road. The factory owners had employed these children even during the pandemic that too without following any norms.

Between the age groups of 10 to 13, a majority of the children are from Bihar, UP and Nepal, while only a few are from Jalandhar.

Expressing concern over the exploitation of children, he said the erring people in this illegal act would face severe punishment for mistreatment of children.

A case under Sections 3 (3) A of Child Labour Act; Section 79 of Justice Juvenile Act, 2015; Section 188 of the IPC, Section 3 of the Epidemic Diseases Act, and Section 51 of the Disaster Management Act has been registered against the owners of factories and contractors, who were behind supplying these minor children to them.

With most of the children belonging to other states or Nepal, Bhullar said the Commissionerate was probing the angle of human trafficking in the case. He said the rescued children were being produced before the Child Welfare Committee and then shifted to protection homes as per guidelines.

The NGO’s Chandigarh team had complained to ADGP Gurpreet Deo and IG Nageshwar Rao between 9 and 10 am this morning, following which the complaint was marked to the Commissioner of Police, Jalandhar. The NGO lauded swift action in the case.

Activist Dinesh Kumar, who accompanied the police and administration’s team in the raid, said: “The police action is laudable because swift action has been taken on a complaint submitted this morning by the BBA, Chandigarh team. The children were hiding on the roof using a false wooden ladder. While there were many employees at the place, none were wearing masks and all children were being made to work without social distancing protocol. The children were living in vehras (common colonies) – some with parents and others with relatives, who brought them from different states and from Nepal.”

The children were employed in folding and making chappals at the factory. Notably, rubber industry is included among the most hazardous occupations.

Member CWC, Jalandhar Amarjit Singh Anand said: “The children are still at the Gandhi Vanita Ashram. While boys shall be shifted to a shelter home in Hoshiarpur, girls will be housed at a protection home in Jalandhar. One of the children had temperature when checked by the medical team. The rest of them are healthy.”