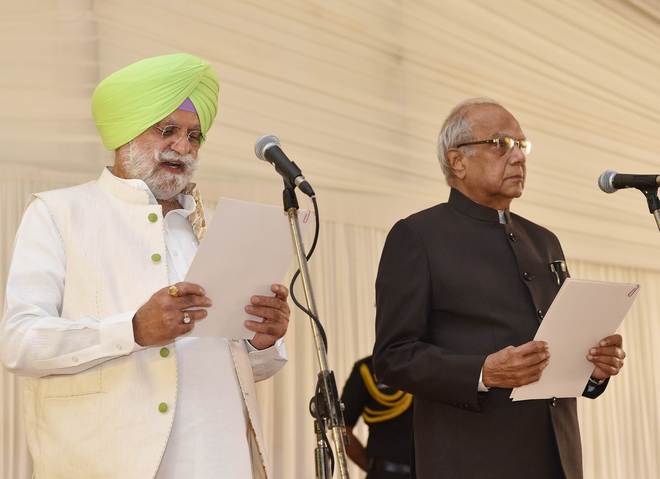 Rana Gurjeet Singh takes the oath in Chandigarh on Sunday.

Even as Punjab affairs incharge Harish Rawat has defended the induction of Rana Gurjeet Singh into the Charanjit Singh Channi Cabinet, six party MLAs from the Doaba region opened a front against the elevation today, saying they will continue their “crusade against corruption” and try to convince the high command to remove him from the Cabinet.

Why has corrupt and tainted Rana Gurjeet been given Cabinet berth? Representation may instead be given to a clean SC leader. Six Doaba MLAs

Leadership has verified facts. No charges have been proved against them (Rana Gurjeet and Gurkirat Kotli) and they had been exonerated. — Harish Rawat, Punjab Affairs Incharge

Ahead of the declaration of the state Cabinet this morning, the leaders, including six Congress MLAs, three of them from the SC community, met PCC chief Navjot Singh Sidhu and asking him to impress upon the high command to drop Rana Gurjeet from the Cabinet.

Their prime objections were the sand mining charge against Rana Gurjeet and lack of enough SC faces in the Cabinet, even though 38 per cent of Doaba’s population belonged to the community.

The MLAs said all three leaders given Cabinet berths from the SC-dominated Doaba region were Sikhs. “At least one berth could have been given to an SC or a Mazhabi Sikh. Even a Hindu face has been removed. That is our argument. It’s not division — we have only tried to oppose a person who carries a taint,” they said. While Doaba has 23 Assembly segments, 18 of these are represented by Congress MLAs. Of these, eight seats are reserved. The three MLAs from Doaba inducted into the Cabinet include two Jat Sikhs — Pargat Singh (Jalandhar Cantt) and Rana Gurjeet Singh (Kapurthala) — and an OBC Sikh — Sangat Singh Gilzian (Urmar).

Meanwhile, defending the induction of Rana Gurjeet and Kotli, Punjab affairs incharge and AICC general secretary said the party leadership had gone into the details and verified facts in both cases.

The seniority of four-time MLA Kaka Randeep Singh Nabha worked in his favour as his case was taken up by the party high command. He ousted two-time Fatehgarh Sahib MLA Kuljit Nagra from the race for a Cabinet berth.

Four-time legislator
Kaka Randeep Singh Nabha, 50, Amloh
The four-time MLA took the primary membership of the Congress in 1985 and went on to serve as the convener of the Indian Youth Congress (Kisan Cell). A product of The Lawrence School, Sanawar, Kaka Randeep first contested the Assembly elections from Nabha in 1997 as an Independent, but lost by a narrow margin in an Akali wave. In 2002, he contested on a Congress ticket and won. He went on to get re-elected from the seat twice i.e. in 2007 and 2012. In 2017, he shifted to the Amloh seat in Fatehgarh Sahib, after Nabha was declared a reserved constituency, and won. He was deputed by Rahul Gandhi to oversee the Assembly elections in Mizoram. He also worked for the party in Karnataka, Tamil Nadu, Rajasthan, UP, HP, Haryana and Punjab. Married into the royal family of Afghanistan, Kaka Randeep is a member of Khalsa College, Patiala, Khalsa College, Amritsar, and lifetime member of the Blind Institute, Chandigarh. Surinder Bhardwaj

What went against them
SC Post-Matric Scholarship scam
Former Minister for Social Justice, Empowerment and Minorities Sadhu Singh Dharamsot figures in a probe into disbursal of SC Post-Matric Scholarship. The case pertains to a probe report tabled by former ACS Kirpa Shankar Saroj into the Rs55.71 crore scam. Though Capt Amarinder government gave him clean chit, the CBI and ED are investigating the disbursal of funds.

Former PCC chief Sunil Jakhar played a key role in Rana Gurmit Sodhi’s ouster. A bête noire, Jakhar has opposed his inclusion in the 2018 Cabinet expansion. He had written to AICC general secretary KC Venugopal and then CM Capt Amarinder Singh, seeking criminal proceedings against Sodhi in alleged double compensation case. Rana had won the case in SC. “I have every right to claim genuine compensation for ancestral property. I have won cases right up to SC,” Sodhi maintained.