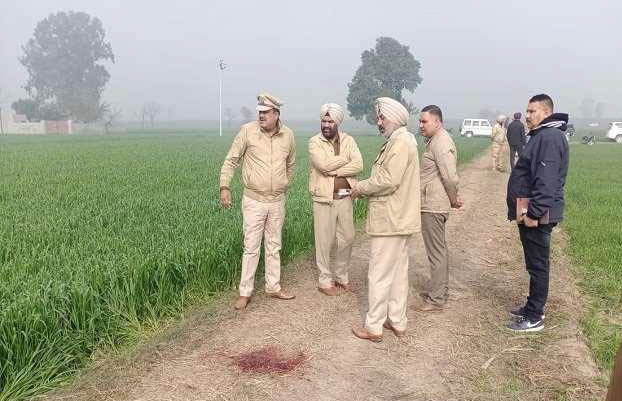 Police conduct investigation at the crime spot after an elderly was found murdered at Nau Gajja village of Kartarpur. Tribune photo

A 72-year-old man was reportedly killed by some unidentified persons late on Monday. Apparently attacked with sharp-edged weapons, his body was found in a pool of blood at Nau Gajja on Tuesday.

According to the information, Seva Singh, a resident of Nau Gajja village, went missing from Nau Gajja Kala Bahia link road around 5 pm on Monday. His family members told the police that as per routine, he had gone there to get fodder for their cattle.

However, he didn’t return for hours, following which, his family members approached the local police. Bhagat Singh, his son, said after searching for hours, his body was found from a field.

Rajeev Kumar, SHO, Kartarpur police station, said there were severe injury marks on his body. While they were yet to ascertain the exact reason behind the murder, they were investigating the matter. On receiving the information, DSP Kartarpur and a team of CIA Staff-2 also reached the spot. After sending the body for the post-mortem examination, a case under Sections 302 and 34 of the IPC was registered.