A communion of cultures 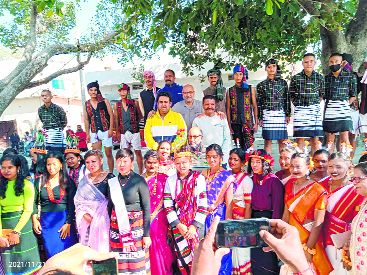 Participants during a cultural programme organised under Ek Bharat Shreshtha Bharat initiative by the BSF at Jaijon. Tribune photo

Under the ‘Ek Bharat Shreshtha Bharat’ campaign, a cultural programme was organised under the joint aegis of BSF Wives Welfare Association, Subsidiary Training Centre, Border Security Force, Kharkan Camp and Baba Aughad Mahila Mahavidyalaya, Jaijon. During this programme, the new BSF constables from different states, clad in their traditional costumes, interacted and shared information about their culture, traditions and state with the students of the college and presented a beautiful cultural programme. Madhu Sudan Sharma, Inspector General and Jyotsna Sharma, President of BWWA, long with Avinash Rai Khanna, Former Rajya Sabha MP and president of Baba Aughad Trust, officers, subordinate officers and staff of the STC were present. Speaking on the occasion, Avinash Rai Khanna, while appreciating this effort of BSF and BWWA, lauded the contribution of the force and urged to continue such efforts in the future as well. — OC