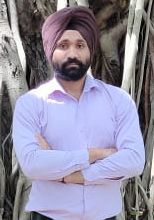 At 34, Varinder Singh has a collection of hundreds of butterflies, captured on camera

He’s a cop who chases butterflies. In 34-year-old Varinder Singh exists a rare combination of a cop, scholar and an unusually well-informed ecologist.

At 34, he has a collection of hundreds of butterflies, captured on camera during his myriad excursions across the state. A believer in working behind the scenes, he has consistently avoided the limelight when tried to be given credit for the huge wealth on the state’s wildlife that he has amassed through photographs. However, he is eager to help when his scores of ecologist friends from across the state call him to seek help on moth, butterfly, snake or spider species that they cannot identify.

They consider him a one-man library. An employee of the police department, it was from his village Sibbi Chak near Hajipur in Hoshiarpur that his interest in wildlife was sparked. A dead snake on a staff killed by a villager to whose home it had strayed evoked sadness in him. He launched an investigation into the snake species (which he ultimately got to know was a very rare kind). Since then he took it upon himself to educate villagers and friends not to kill snakes. There has been no looking back since.

He has rescued many snakes, but his prime interest lies in butterflies. Not just in jungles, he has spotted them in the midst of congested cities and urban gardens and some are of the rarest of the rare kinds.

His photographed collections also include the vagrant butterfly, Acacia Blue Butterfly, Common Red Eye, among others. A profound lover of the environment, he is acutely concerned about what’s happening to the food chain.

He says, “I was brought up in a village with trees all around. I saw people killing snakes and that how my curiosity got aroused. I started rescues, but then held back when people started sharing it too much on public spaces and calling me a lot. As I also have my job, but then I began photographing butterflies. They are most common in wetlands where many male butterflies gather for mud puddling too. But I have spotted the rarest of butterflies in urban spaces too. There’s no rule to where you can find them.”

He shares concerns about wildlife and the state. “So many insects were so common when we were children. For example, beautiful Red velvet Mite among insects or the common house sparrow among birds. Now they are nowhere to be found. The Green Revolution has become greed revolution. Our fields had so many trees. Mango, jamun, etc, trees were common in fields. Now they are very few. Snakes, insects, small animals which fed and lived on these trees have gone missing from our environs as a result. The burning of parali and wheat straw has further claimed casualties in the animal kingdom. We have a few years left in Punjab. The rate at which wildlife is being destroyed, the few animals that are left will be gone soon.”

He is infuriated by stone crushers decimating the hills, urban concrete jungles ravaging forests, trading of rare animals like owls and turtles. He’s given lectures to people mistreating animals and is a friendly guide to all those seeking information or help on wildlife. Some of the creatures he spotted have not even been spotted anywhere in the state, as per the latest information available in public domain.

He has also co-authored a PhD thesis on butterflies and has a special nest at his home where a pair of common mynahs, pair of pigeons, pair of laughing doves and Red Vented Bulbuls happily coexist.