ASI responds to funerary notices with a request to plant saplings, runs campaign against social evils 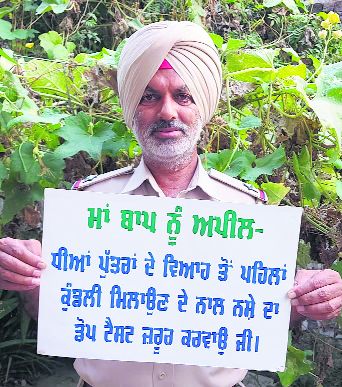 These couplets of exhortation are concluding lines of a man’s letter sent to the family of a deceased person, a complete stranger to the sender. He primarily looks for his receivers in the obituaries, funerary notices and other such things printed in the newspapers. This is a 55-year-old man residing in Kapurthala who searches them, collects them and posts a letter to each of those families expressing his condolences for their loss all the while requesting them to plant a tree in memory of their loved one. This simple act of kindness has now turned into a campaign.

A cop, social activist and an environmentalist ASI Gurbachan Singh Bangar posted at police line, Kapurthala, is a one-man movement bringing about social change through letters, witty cycle signage, village campaigns and pamphlet activism. In past 15 years, Singh has written to 29,000 people. Many have expressed awe. The general populace, celebrities and ministers have lauded his social media campaign. Latest being singer Garry Sandhu who planted a tree and shared his letter on social media after mother’s demise.

The ASI started the campaign back in 2005 after a Nawanshahr doctor’s daughter died. The doctor was surprised, responded to the request and rang him up to pay regards. Singh says, “People have been taken aback by my letters. They have visited me, thanked me. It’s unusual for a stranger to ask them to plant a tree. 2120 tak Punjab khali ho jana, koi nahi bachna (state could be a living hell till 2120, no one will be left). Water is wasted day in and day out. Lakhs of money down the drain, there will be no water left soon. People need to conserve water often.”

Drug abuse is the other thing he is strictly against. For the past three years he has been spreading awareness on dope tests of bride and grooms, both in cities and villages, before tying the knot urging parents to adhere to the task before it is too late. Other issues he raises are foeticide, save girls, environment, Covid among many more.

According to him, people should also worry about their carbon footprint. “I try to use my bicycle to ride to nearby villages. It takes around two to three hours. People have welcomed my campaign with enthusiasm and invite me to villages to speak upon social evils,” he adds.

In August, he also employed about 35 to 40 cycle-borne men of the Kapurthala city whom he had seen pedalling the streets in the morning. Now, their sessions comprise visits to the villages with the ASI – them in tracksuits and Singh in his uniform.

He has also been sought after to utter a few wise words at political-social campaigns and to talk at Gurdwaras. However, this is not his thing. “I don’t work for any political party. I work for country, state…to save youth),” he says.

His campaign messages are also often laden with satire. His pamphlet on exhortation against drugs reads…

On March 3, 1992, Gurbachan Singh Bangar, then a constable, had also started a peace march on bicycles, bearing ‘Shanti March’ signs across the troubled state, from Ferozepur along with fellow constable Balwinder Singh. In 1994-95, he traversed 25,000km spanning the length of the entire country (from Kashmir to Kanyakumari) on a bicycle again with like-minded colleagues to spread the word. The journey was approved by the Police Department. His carefully devised campaign also earned him the charge of the education cell of the traffic police in Kapurthala.