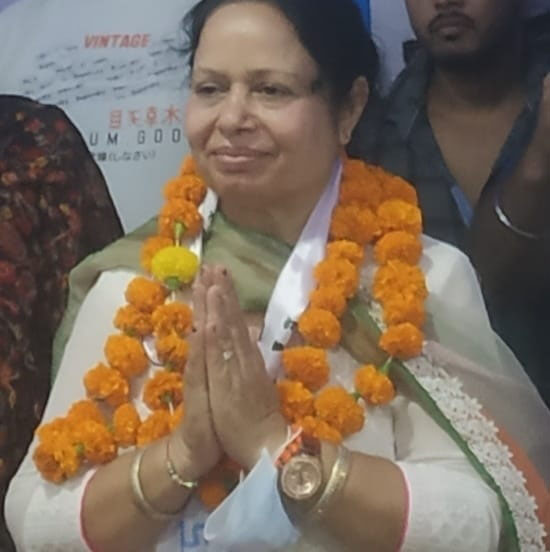 Former Additional Sessions Judge and Aam Aadmi Party candidate from Kapurthala Assembly seat, Manju Rana, has lodged a complaint against minister Rana Gurjeet Singh in the court of the Kapurthala Judicial Magistrate over the alleged use of wrong language against her three months ago.

Manju Rana’s lawyers Suket Gupta and Manit Malhotra today filed a complaint in the court of Jasvir Singh after which the court has put February 1 as the next date of hearing. The court has also called the status report from the Kapurthala City Police Station on the complaint lodged on November 9 last.

The complaint has been lodged under Section 156 (3) of the CrPC for calling the report on the status of the complaint filed by the complainant and for directions to the SHO, PS City, Kapurthala, to register FIR under Section 354A, IPC, and other relevant provisions in accordance with law.

Manju Rana, who is also former presiding chairman of Permanent Lok Adalat, has said that on the day of Dasehra, she along with other party members were serving water to public. At that time, Rana Gurjeet Singh, who had also come to attend Dasehra stopped his car near her and called her through her team members. When she received the message, she went near the car of the minister and offered him a glass of water. She has alleged that Rana Gurjeet Singh refused to accept water and instead passed remarks to her with allegedly a bad intention and said ‘Madam, tuhade palle ki hai’.

Manju Rana had alleged: “The minister said this with an intention of outraging her modesty. The act of accused of speaking/uttering these words in a manner totally disrespectful towards a women and retired judicial woman officer in the presence of others members and public was cruel. The minister is liable to be condemned and he is liable to by punished after registration of a criminal case. I got totally perplexed and shamed in presence of public and party members because of the remarks and actions amounting to criminal assault as he also raised his hands to support his remarks in the public. The accused by his action of spoken words and assault violated the modesty of the complainant and the feminine decency that the complainant like every woman possesses. It has nothing to do with her age and the guilty intention of the accused plays a vital role in determining the offence and the accused deliberately ridiculed the complainant. Accordingly the complainant submitted a written complaint against the accused before SHO PS Sadar, Kapurthala, on November 9.”

The retired judge said even though the SHO promised to look into the complaint and investigate after registration of formal FIR and a short preliminary inquiry as to the nature of offences disclosed by the complainant, but he did not take any action. “Feeling aggrieved on the failure of the SHO to register the formal FIR, the complainant wrote email to the Punjab Mahila Commission, Punjab and Haryana High Court, SSP, Kapurthala, and other officials. A copy of email was sent to the SSP under Section 154 (3) CrPC on November 12,” said Rana’s lawyers.

The counsels appealed before the court that a status report from the SHO, PS City, Kapurthala, regarding the action taken on the complaint of the complainant be sought and in case no FIR is registered, then the SHO may please be directed to register formal FIR for the cognizable offences, or in the alternative the complaint be treated as a formal complaint and the inquiry for taking congnisance of offence may be held by the court and the accused may be summoned, tried and punished in accordance with law.