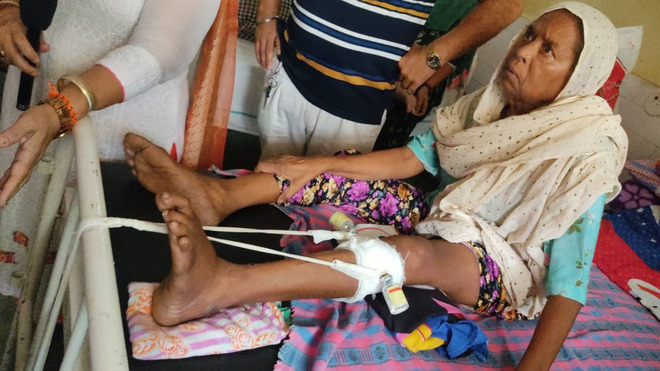 An under treatment patient at the Kapurthala civil hospital.

The Kapurthala Civil Hospital authorities were taken aback when a team of the Aam Aadmi Party leader and workers paid a ‘surprise’ visit to the hospital here on Saturday.

During her visit to the hospital, former Additional Sessions Judge Manju Rana, who joined the AAP a few days ago, raised the issue of insanitary conditions and lack of proper care of patients at the hospital.

Rana, along with a team of over a dozen supporters, videographers and mediapersons, visited the hospital. While she maintained that she had gone with her team to visit a patient, she admitted that her supporters also accompanied her to the hospital.

There happened a heated exchange of words between the AAP supporters and hospital staff as Rana visited wards, videographed patients, and commented on the ‘deplorable’ state of the hospital. The heated exchange ensued when Rana alleged that a patient’s wound in a leg had not been bandaged for the last five days.

While her supporters termed it life threatening, the SMO present on the occasion took exception to the comment and a heated exchange ensued between him and Rana’s supporters with the SMO questioning how the wound was life threatening.

Terming the condition of infrastructure and upkeep of the hospital as deplorable, Rana said, “We visited the hospital today and it was in such a deplorable condition. The bathrooms stink to high heaven, making it difficult for people to pass the area without feeling nauseated. Half the door of the women’s bathroom is also gone and the washrooms are not cleaned. One nurse was attending to 44 patients. In some of the so-called private rooms, the room and the bathroom had not been cleaned for ages and the window had a bird’s nest in it.”

Rana said she would further take up the issue with district authorities. Alleging poor care of patients, she said, “One of the patients with a leg wound has not been bandaged for the last five days. Another elderly woman with a defect in a leg had a drawstring tied to her feet and bricks for treatment.

“The hospital is severely understaffed and more manpower is urgently needed. We had a word with the SMO and brought it all to his notice.”

SMO Sandeep Dhawan said, “The issue was brought to my notice. Some of the supporters were wrongly terming an injured man’s situation as life threatening. But the former judge understood this point and the issue was resolved.”