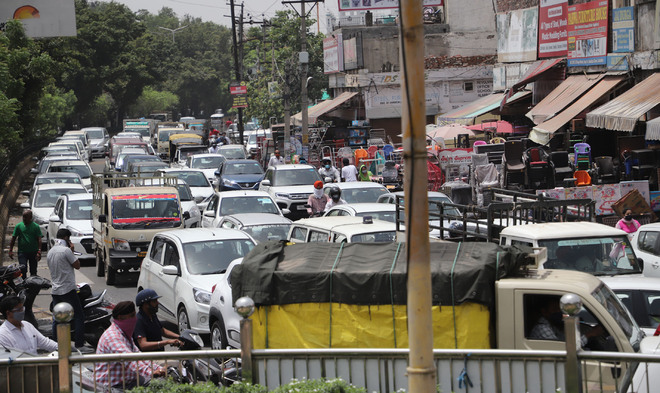 Huge traffic jam was witnessed at Nakodar chowk as AAP leaders and workers staged a dharna over non-implementation of post-matric scholarship scheme in Jalandhar on Friday. Sarabjit Singh

Workers and leaders of the Aam Aadmi Party on Friday held a protest at one of the busiest places, Dr BR Ambedkar Chowk, around noon leading to a chaos on roads here.

The leaders blocked all exits of the roundabout with commuters continuing to honk their vehicles and urging politicians to leave the road for their movement. Many ambulances got stuck in traffic snarl-ups, but the politicians did not pay heed and continued making their speeches against the state government and the Centre over the SC Post-Matric Scholarship Scheme issue.

It became unbearable for the motorists to bear the scorching heat and wait helplessly for the agitating politicians to leave the dharna site. The AAP leaders included Saravjit Kaur Manuke, Baljinder Kaur, Amarjit Singh Sandoa and Jagtar Singh Jagga Hissowal kept on taking turns on the mike to deliver their 5- to 10-minute speeches while the rest squatted on the mats put up at the site.

Even local leaders, including Rajwinder Kaur, Dr Sanjeev Sharma, Dr Shiv Dyal Maali and others, did not urge the party leaders to wind up quickly and leave. Many residents vented their ire against the party workers on social media. More importantly, even the cops on duty allowed the protesters to continue with their agitation. No attempt was made to disperse them. Clearly, the protesters violated a number of rules.

Firstly, holding a protest and that too with a huge gathering and not following the norms of social distancing is not permissible under the Epidemics Act and Disaster Management Act. Secondly, a majority of the leaders were not wearing any mask. Thirdly, there are fixed sites for holding demonstrations in the city, including some grounds, and most popular being open spaces in the PUDA market in front of the District Administrative Complex. The authorities had not given any permission to hold the protest in the centre of the busy roundabout.

Tarandeep Sunny, one of the organisers of the event, said, “We had organised the protest leaving a larger part of the road. Many AAP workers and the cops remained on toes to ensure that minimum traffic hindrance occurred during the dharna.”

Police Commissioner Gurpreet Singh Bhullar said he was aware of the problems and inconvenience suffered by the residents. “I am yet to check if an FIR has been lodged against the AAP leaders. I will talk to my teams and do the needful,” he said.

Police Station Division No.4 SHO Rakesh Kumar said, “We may file an FIR. We are still in the process of finalising it.”

As more than 300 AAP workers joined the dharna against the violations, Gurmeet Singh, DCP, Jalandhar Police Commissionerate, said, “We are in the process of registering an FIR against the agitators under Section 188 of the IPC, the Disaster Management Act and Epidemic Diseases Act.