NGO provides sporting gear, promises all help to her for district-level games 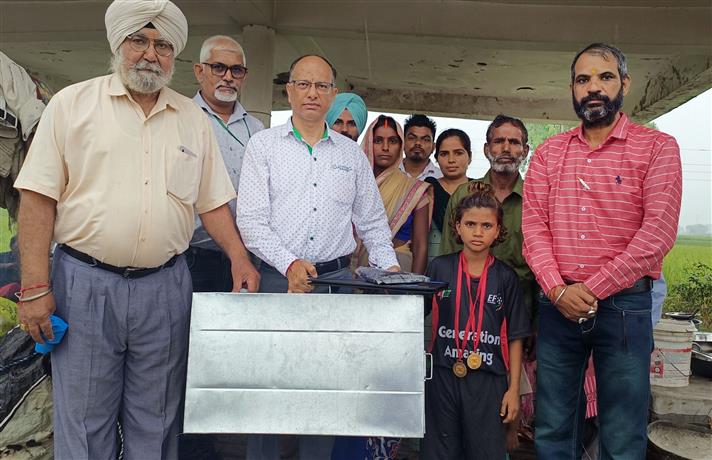 Rachna Kumari, 10, being given the assistance. Photo: Malkiat Singh

After Jalandhar Tribune reported about 10-year-old Rachna Kumari, a gold medal winner in tehsil-level primary games, in these coloumns, several non-governmental organisations and the administration have come forward to assist her.

While the district administration has provided her monetary help of Rs 10,000, Satyamev Jayate Society presented the necessary items such as a big trunk, a jersey to her. Apart from this, the NGO has offered every kind of help the girl will require to prepare for the district-level games.

Rachna Kumari, who won a gold medal in skipping during the tehsil-level primary school games held on September 16-17, has now started practising under her school head teacher Buta Ram for the district-level games starting later in the month.

Dheeraj Gupta, Regional PF Commissioner Ludhiana gave inspiration and guidance to the NGO to help the girl. Gupta said the eminent people of society should come forward and help in every possible way to encourage the emerging players. He said: “Sports gives physical strength as well as mental strength and help children gain confidence. It is through sports that students become more positive and also learn to face challenges. Therefore, encourage students to play and should also be rewarded for performing well.”

Satyamev Jayate Society president Pankaj Sarpal said Rachna was a source of inspiration for children and her society was encouraging budding sportspersons. There is no dearth of sporting talent in India. But many players are not able to pay attention due to financial constraints,” he said. Society vice-president Jasbir Singh, joint secretary Raju Malhan and head teacher Buta ram and parents of Rachna Kumari were also present on the occasion.