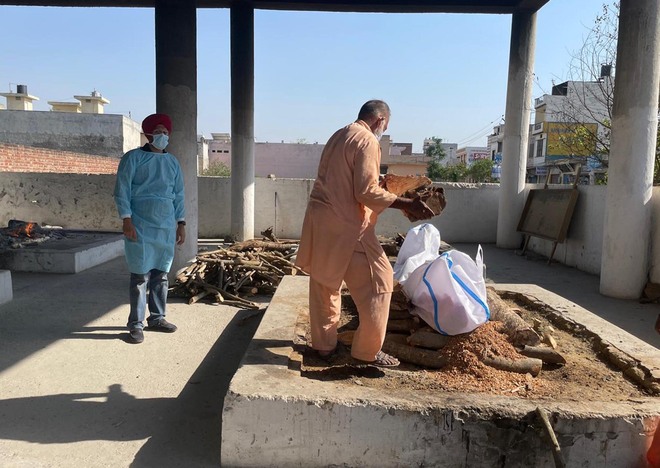 The body of the victim being cremated in the presence of a government official. Tribune photo

Close on the heels of an incident in which the administrative authorities had to face flak on Saturday after the video of a poor man from Ram Nagar locality surfaced in which he had to carry the body of his 11-year-old daughter on his shoulders for her last rites, the officials seem to have begun taking corrective measures.

The officials today got conducted the last rites of another Covid-suspect patient in a dignified manner today. His family members were not around and villagers were hesitant to perform the last rites because of fear contracting the virus.

On Saturday, the administration received a call on its control room that a migrant, who was working as caretaker of an old woman and a Covid patient at Birring village, had passed away. The villagers suspected that migrant had also contracted the infection and succumbed due to virus.

The caller requested for cremation of the migrant as his family was away to Bihar, following which Deputy Commissioner asked SDM Dr Jai Inder Singh to ensure dignified last rites of the migrant.

The SDM formed a team headed by Kanungo Butta Singh, Patwari Kulwinder Singh and others to perform cremation of the body adhering to Covid protocols. An NGO, Aakhri Umeed Welfare Society, helped administration in wrapping the body of victim.

Singh added that cremation was done by team members while wearing PPE kits, gloves along with other necessary precautions, considering this a service to humanity.