After Covid, MIS-C is threatening children 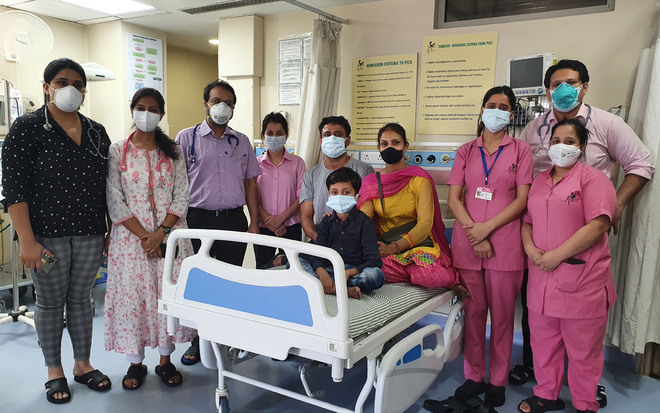 An MIS-C patient under treatment at a private hospital in Jalandhar. Tribune Photo

After witnessing a surge in Covid positive cases followed by mucormycosis or black fungus cases, Jalandhar district is now seeing an increase in multisystem inflammatory syndrome in children (MIS-C) cases.

This autoimmune disease has been reported among children (aged from 6 years to 10) who had contracted Covid. The youngest patient in the district is stated to be a 10-month-old baby.

As many as 40 cases of MIS-C have been reported in the last two months. Patients from Malerkotla, Mukerian and Himachal Pradesh, have got their children admitted to hospitals in Jalandhar.

Followed by high-grade fever, the patient suffers pain, inflammation in various organs and could lead to serious cardiac problems if not treated in time.

A few days ago, Una-based Manmohan Singh Dhiman’s 8-year-old son developed a mysterious fever, which refused to come down. After two to three days, there was pain in stomach followed by headache, nausea and vomiting. Initially, Dhiman took his child to a hospital in Hoshiarpur, which referred him to Jalandhar, where the 8-year-old was diagnosed with MIS-C.

Dr Gurdev Chowdhary, Pediatrician, Ankur Hospital (Jalandhar), said, “We are getting regular cases of MIS-C for the last two months. A total of 40 cases have been reported at our hospital alone. MIS-C is an auto immune disease, which is seen in children who have been infected with Covid-19 at some point earlier. It does not matter whether the child had symptoms of infection or not. Children who test positive for Covid antibodies get MIS-C. These children suffer from high-grade fever, rashes, redness in eyes and inflammated joints. Different body parts can get inflamed, including heart, lungs, kidneys, brain, skin, eyes, or gastrointestinal organs.”

Dr Gurdev said, “In many cases, families are not even aware their children might have been Covid positive. It’s not an infectious disease, but it is very severe. At least eight of our patients have been on ventilators. If not treated in time, the disease can also cause cardiac issues in children in future.”

While all the patients admitted to Ankur Hospital have survived, Dr Chowdhary has a word for caution, “We have a special children ICU and have had severe MIS-C cases. The disease is not infectious and children with the MIS-C can stay with family. However, since it’s very serious, people should observe Covid-appropriate behaviour for protection of their kids.”

Dr Sahil Vikas, Paediatrician, Jalandhar Civil Hospital, said, “We haven’t received any case of MIS-C in Jalandhar so far, but formal monitoring of cases reported at private hospitals has begun. Reports are being compiled and will be sent to the higher authorities.”