At 72, Parveen has already several medals to his name, hungry for more 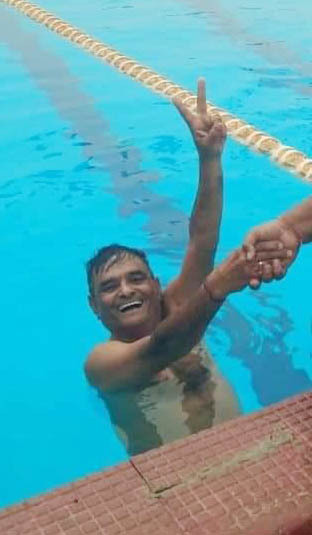 Normally, businessmen don’t have much time for other things than their work. But Parveen Kamal Gaind always had enough when it comes to swimming.

At 72, the industrialist for sure has aged but his love for swimming hasn’t grown old. He has always kept it close to his heart. Last year, he won two gold medals in 200m and 400m, respectively, during the All India Masters Competition held in Lucknow between October 18 to 20.

“I was in class IX in 1964 when I started swimming. I continued it till 1972, and in those eight years I took part in state, national, inter-university championships and won several medals,” Parveen says. But after 1972, as he got enmeshed in the business, the game took a backseat. However, it sprung back to life after his well wishers and friends encouraged him to continue with swimming. Since then, he has been taking part in various events across the country.

Parveen, who owns a machine tools unit in the city, said being a businessman himself, he knows that business persons do not give much time to physical exercises and are concerned about their workaday life. “But I would like to say that our health is a prized possession for us. And we must devote time to our body as if we remain fit, we will be able to do other work properly and also save money, which we end up spending on medicines otherwise,” the golden ager quips.

He was also set to go to New Zealand to participate in an international event but as fate would have it, he couldn’t go and then pandemic further grounded his plans. Now, the septuagenarian, with resumption of competitions on his mind, is already licking his chops as he waits to get up and running again. However, these days he’s into breathing exercises. “Swimming is an exercise that is naturally good for breathing and since the virus is directly linked to breathing, these exercises help one to fight the disease well,” he shares.

A face of inspiration for the younger generation, he also encourages his grandsons and granddaughter to indulge in the sport. “Swimming is an exercise of the lungs and heart too. One must do it,” he says.