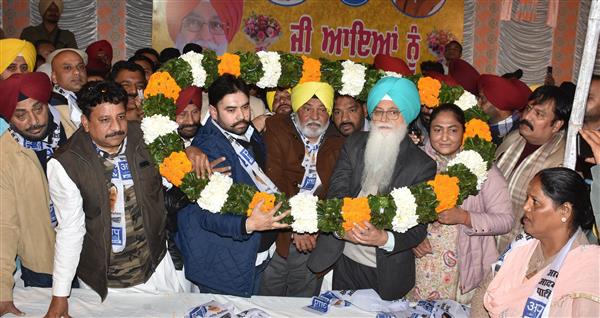 Ahead of the MC elections, several key leaders from various parties embraced the Aam Aadmi Party (AAP) today. A councillor, a Congress leader wielding influence and a close aide of another Congressman were among a host of leaders who joined AAP in the presence of Cabinet Minister Inderbir Singh Nijjer. AAP’s Jalandhar Central MLA Raman Arora and Jalandhar West MLA Sheetal Angural were also present on the occasion.

Prominent leaders who joined AAP included Ward No.16 BJP councillor Manjinder Singh Chatha, Kaku Ahuwalia and Sukha Pholariwal among others. Chatha, who is the leader of Opposition in the MC House, is a five-time councillor and leader who wields enormous influence. Chatha is considered close to BJP leader Manoranjan Kalia. Speculations were rife last January too, that he would join SAD, but he stayed in the BJP after senior leaders persuaded him.

However, Chatha today joined AAP and became its very first councillor in the House. Another AAP joinee was Kaku Ahluwalia, Congress leader and son of former chairman of the Improvement Trust Daljit Singh Ahluwalia. Two-time Youth Congress president Kaku Ahluwalia is a popular leader among the youth.