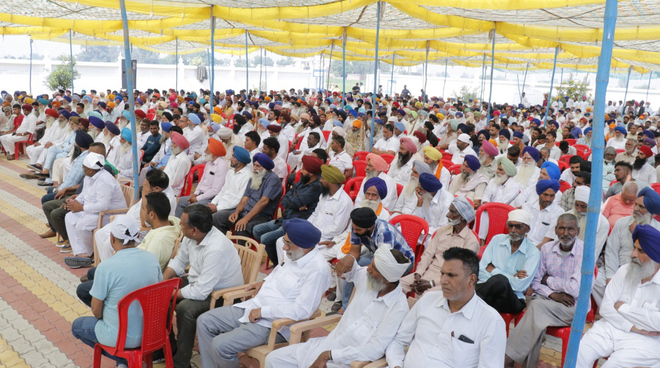 People participate in the rally, organised by Bachitar Singh Kohar in Shahkot on Thursday .

The rally was held at Kohar Khurd, the native village of the family. Various traditional Akali families, youth SAD workers, ex-Zila Parishad and Block Samiti members, ex-panches and sarpanches and other party leaders gathered to raise their demand that the grandson of Ajit Singh Kohar, who won from the seat for five consecutive tenures, had a rightful claim from the seat.

They demanded that while SAD chief Sukhbir Badal had announced its 74 candidates from across the state, the party should announce this ticket for Kohar junior, who is also an advocate, at the earliest.

They said if Bachitar Singh Kohar would get the ticket, they would take him to victory. Bachitar’s father Naib Singh Kohar had lost with a huge margin against Congress’ Hardev S Laddi Sherowalia in 2018 bypoll, held after the demise of Ajit Singh Kohar.

Bachitar too addressed the gathering at the end and thanked everyone for their support. He said: “Today’s gathering proves as to who should get the ticket from Shahkot. I have done my best to fulfil the duty as halqa in-charge of the party from the seat. But if Sukhbir Badal wants to contest from here, I will welcome him with an open heart.”

The party workers in the area said that Kohar’s idea of organising the rally today had a twin purpose – to put up a claim for himself before a final call is taken and to thwart a likely entry of Rajanbir Singh, son of ex-Finance Minister Balwant Singh into the party fold.