All shops across Jalandhar remain shut : The Tribune India

A street wears a deserted look as all markets and commercial establishments remained closed in Jalandhar on Friday. photos: Sarabjit Singh

Almost all markets and commercial centres of the city remained closed on Friday as the SC community had given a call for a bandh in protest against the alleged comments of former Advocate General Anmol Rattan Sidhu regarding not following reservation policy in the appointment of law officers.

The SC community led by Valmiki Sabha leader Subhash Sondhi, Safai Mazdur Union leader Chandan Grewal and Guru Ravi Dass Tiger Force chief Jassi Talhan ensured that all businesses remained shut. Zipping across the city on bikes, they forced some banks, shops, restaurants and ATMs to pull their shutters down on their call for bandh. 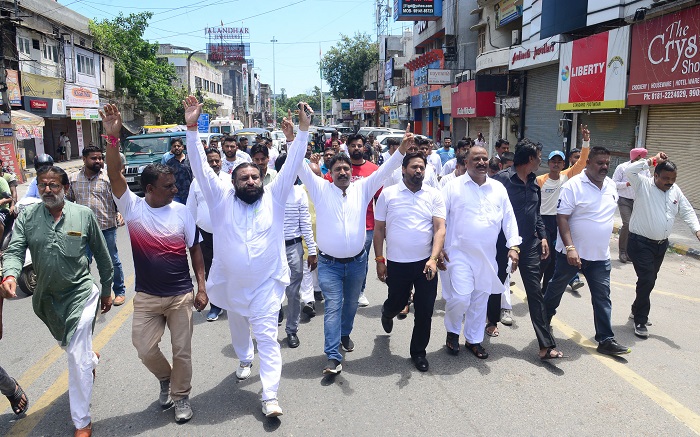 A majority of the schools and colleges also announced closure on Friday to ensure safety of the children since the bandh call was given from 9 am to 5 pm. The movement of vehicles on city roads remained only partly affected as motorists were not stopped. Activists of Valmiki and Ravidassia community have been seeking apology from the ex-Advocate General. They have also been demanding the lodging of an FIR against him. “His comments indicated that the SC community is undeserving to take the job in the AG’s office,” the activists said, adding that even the government had failed to resolve the issue.

A meeting of the community leaders with Minister Kuldeep Singh Dhaliwal earlier on the issue had failed, after which the Punjab bandh was announced. The bandh call was last evening withdrawn by the Valmiki leaders from Amritsar after they were assured of a meeting with CM Bhagwant Mann on August 19. But the SC leaders from Jalandhar took a stand and said they would go ahead with the call and enforce a complete bandh. Business remained affected in the day even as most shops opened after 5 pm.