Students of 1971-79 batch of Sainik School gift a tractor 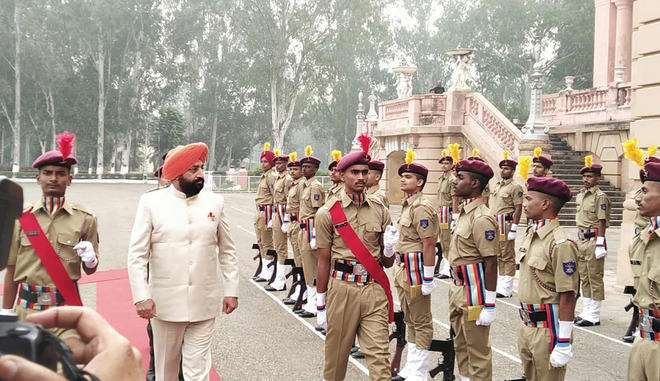 The Governor said he was proud to be part of the school where each cadet was nurtured, cared for and his persona sculpted to make him a confident person, ready to explore diverse opportunities offered by the world. He further said Sainik School had been instrumental in producing innumerable intellectuals and warriors who reached the zenith of their career across diverse professions. Besides, the school’s contribution to the defence forces was huge, he said.

He said it had played an important role in shaping the character of youth by instilling in them the value of patriotism. He congratulated and applauded the school authorities and staff for achieving excellent results in the CBSE examinations and NDA intake during the last few years.

He expressed satisfaction over the perceptible improvement in the NDA results and overall development of the school. He congratulated Col Prashant Saxena for bringing in change and leading from the front. The 1971-79 batch of the school paid their gratitude to the alma mater by presenting a tractor. The old boys interacted with young students and gave them tips on their bright future.

According to the tradition, Col Prashant Saxena and other staff members extended a warm welcome to Old Saikapians, who remembered war heroes and paid homage by offering floral tributes at the Smriti Sthal. The Young Saikapians welcomed their elders in front of the place. The School Band presented brilliantly synchronised band display. Also present on the occasion were Wg Cdr Deepika Rawat, Vice-Principal, and Maj JBS Beg, Administrative Officer.