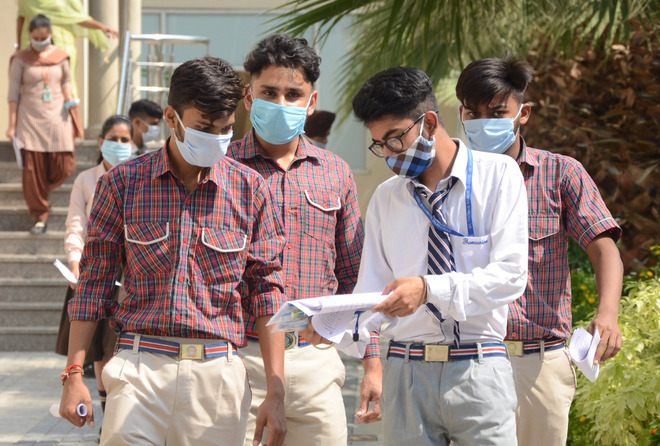 Students come out after apprearing for the CBSE Class X and XII compartment exams in Jalandhar on Tuesday. Photo: Sarabjit Singh

Around 600 students of Class X and Class XII appeared for the Central Board of Secondary Education’s (CBSE’s) compartment exams on Tuesday.

The CBSE ensured that the Covid guidelines were followed at the examination centres. Only 12 students were seated in a class, which had two invigilators.

KS Randhawa, principal, MGN School, said prior to exam, principals were given a list of do’s and don’ts in the wake of the Covid-19 outbreak.

“Apart from social distancing, masks and sanitisers were made available. We had set up two isolation wards, so that students with medical issues could give their exams. Only 12 students were allowed to sit in a class after maintaining a distance of 2 metres. Students with normal body temperature were allowed to enter the centre,” said Randhawa. A total of 127 students of Class XII and five students of Class X appeared for the exams at MGN School. Rashmi Viz, principal, Police DAV School, said 152 students appeared for the exams.

Rajeev Palliwal, principal, Innocent Hearts School, said 126 students from Class XII and six from Class X turned up for their compartment exams. Around six police personnel were deployed outside each exam centre. Most of the students were accompanied by their parents and guardians.

Rishak Arora, who had appeared for his accountancy exam said, “Paper was tough as compared to the last year. Questions were tricky, however, I am hopeful of clearing the exam. Our only concern is that exams are being conducted on a very short notice.”

He said the CBSE itself didn’t follow the rule of informing students about compartment exams around a month ago. After the Supreme Court’s judgment, we had only 15 days to prepare for the exam and I was stressed out throughout the preparation, he said.

Harshpal Singh, who had appeared for economics exam said, “Due to delay in the exam, we almost forgot the syllabus. We should have been informed about the exams a month ago.”