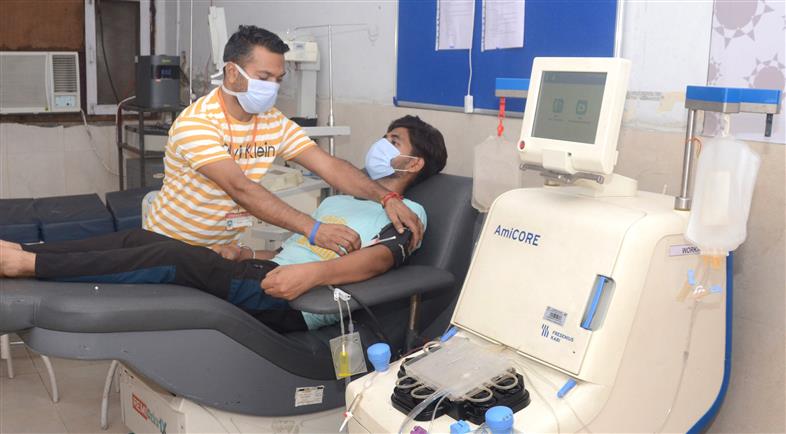 With the unavailability of single-donor platelet (SDP) kits at the Civil Hospital here, patients are forced to visit the Jan Aushadhi Kendra at Babrik Chowk, which is 3 km away and usually a 45-minute drive from the hospital on a busy stretch.

Can’t keep them for few patients

SDP kits will be made available at Civil Hospitals if there is a wave. The cost of a kit is too high and isn’t feasible to keep it at hospitals.Rs Dr Raman Sharma, civil surgeon

Waited for hours to get one

I needed an SDP kit on Friday night, but the Civil Hospital didn’t have any. My daughter’s platelet count was at 15,000. The kit was arranged at 1 pm next day, by then her platelete count further dropped to 10,000. She is currently stable. — Gurcharan, Patient’s father

In most cases of emergencies, the process of donation of platelets gets inordinately delayed as patients get stuck in the crowded area of the city, especially during the night, to reach the centre. An amount of Rs 7,056 is being charged for a single kit at the centre. In addition, patients have to arrange their own donors. At private hospitals, patients are shelling Rs 15,000 to 17,000 for the procedure.

Gurcharan Singh from Nurmahal, whose daughter Amandeep had reduced platelets, said he had to wait half a day for platelets to be administered to her. Till then, her platelet count further reduced.

Gurcharan said, “I needed the SDP kits on Friday night, but the Civil Hospital didn’t have any. It was 10 pm and my daughter’s platelet count was at 15,000. In the night, we couldn’t visit the centre either. It was only early next day that we got them for Rs 7,056. By the time a donor was arranged and the kit procured, it was 1 pm and her cells were down to 10,000. She is currently stable. But with my daughter being still under observation, I was asked to get another kit. I am a poor labourer, I can’t afford another Rs 7,000. Right now I have brought her to another hospital.”

Vinit Puri, general Secretary, Hindustan Blood Donors Club, said, “All patients in late night emergencies are being made till dawn to get an SDP kit. These haven’t been available at the hospital for a long time now.. For a single patient Rs 7,000 (for the kit) is being charged. Private hospitals charge Rs 15,000 to 17,000 per kit. We have filed a case in the High Court on the overpricing of kits at private hospitals, but the practice continues.”

Dr. Gurpinder Kaur, Blood Tranfusion Officer Jalandhar said, “We have already written to the MS and Civil Surgeon on the issue. With the Dengue season coming, SDPs would be needed at the hospital. The cost of one kit is Rs 6,750 but as long as it is not available at the hospital, patients will have to get them from the Jan Aushadhi Kendra. All patients coming to us are being promptly attended.”