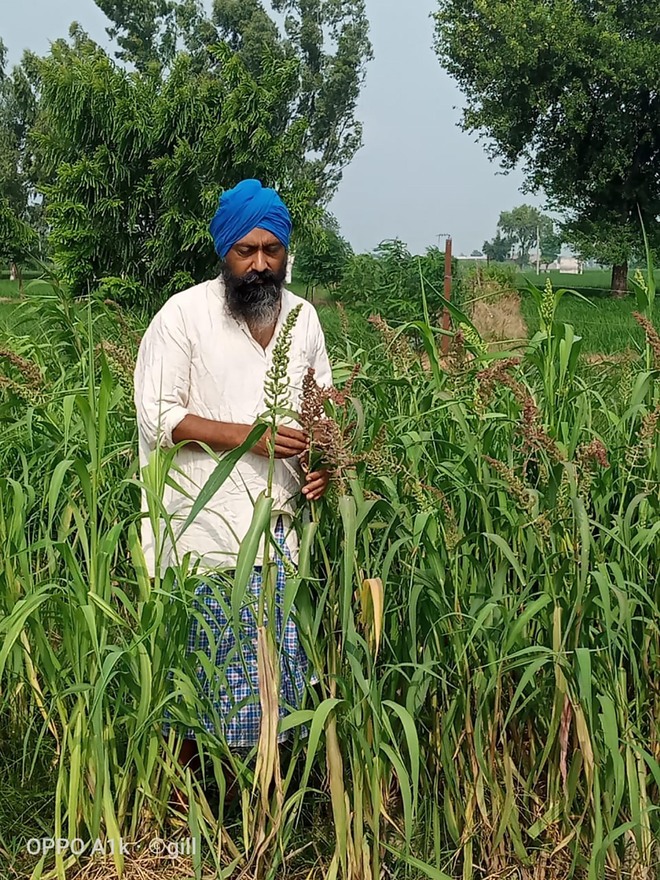 The coronavirus pandemic continues to make headlines everywhere. Doctors and experts are advising people to boost their immunity, especially during the pandemic, as it is the only way to fight the virus.

The pandemic has made people more conscious and aware in improving their immunity and there is a shift to organic products, but interestingly, a few farmers in the district have also shifted towards growing ‘millets’.

Gurtej Singh, a farmer from Mehatpur, said he got to know about the importance of millets when he heard the speech of Dr Khader Valli, known as the ‘Millet Man of India’. The virus found its mention in a three-day camp organised by the Kheti Virasat Mission at Sultanpur Lodhi in March this year. Dr Khadar Vali from Mysuru during his session at the camp had apprised the importance of having strong immunity, along with ways to boost the immune system. In his speech, he said wheat and rice should not be a part of one’s routine, instead millets should be consumed.

That was the time when Gurtej thought of introducing millets and he shunned away wheat and rice from his diet. He is growing brown top millet, foxtail millet, finger millet, barnyard millet, little millet, and kodo millet on his fields.

“Recently, I had parantha made of kodo millet,” he said.

Paramvir Singh, another farmer from Shahkot, who has been doing organic farming, also felt the need to have ‘millets’ in the diet. “I think the pandemic has taught us some lessons and one of them is that you need to have great immunity to conquer the disease, and millets are great to have in case one wants to give boost to the immune system,” he said.

Umendra Dutt, executive director, Kheti Virasat Mission, Punjab, said scores of farmers in the state have opted for this immunity booster (millets) this time. “No pesticides are required for growing millets because there is no pest attack on the crop. It also doesn’t require much water. There are several health benefits of millets and I have been noticing that millets is gaining popularity in the state. Because of the pandemic, we cannot provide enough seeds to farmers, but we want that next year there is an improvement and maximum number of farmers opt for it,” Dutt said.

Ayurvedic Officer Dr Joginder Singh said millets, like bajra, are beneficial for diabetic patients and doctors recommend it in such cases. Several other millets are used in treating other problems too.

Other ways to boost immunity

Dr Khadar Vali, popularly known as the ‘Millet man of India’ had spoken about ways with which one can boost immunity against any viral disease, including coronavirus. He said seven leaves were important for increasing immunity — durva (bermuda grass), tulsi (holy basil), giloye (tinospora cardifolia), bel (aegle), karanj (pongamia pinnata), neem and peepal. He said the decoction (kaadha) of these important leaves increases immunity and a person could protect himself from any viral disease.