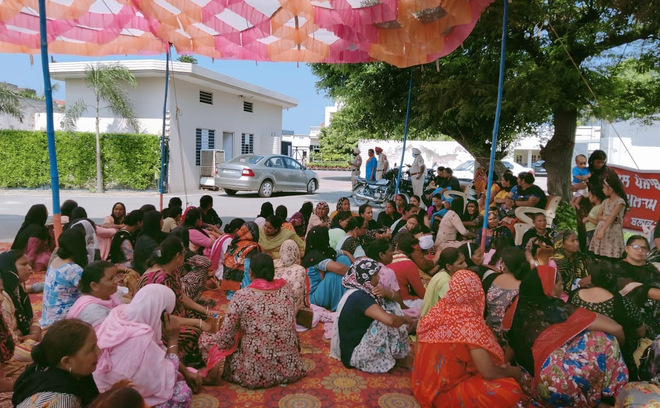 Anganwadi workers stage a protest in front of the house of Congress Legislator Hardev Singh Laddi Sherowalia at Shahkot.

In their protest held outside a Congress leader’s residence, Anganwadi workers sent a blood-soaked letter to raise their demands with Chief Minister Capt Amarinder Singh here on Friday.

On the directions of state president of Hargobind Kaur and under the leadership of block president Sunita Rani, the All-Punjab Anganwadi Workers’ Union, Block Lohian and Shahkot, sat on a hunger strike in front of the house of Congress legislator Hardev Singh Laddi Sherowalia.

On the occasion, they raised slogans against the Punjab Government. The workers and helpers who had gathered in large numbers wrote their demand letter in blood and sent it to Capt Amrinder Singh through the legislator.

They demanded that the children of anganwadi workers (in the 3-6 age group) who were sent to government primary schools in 2017 should be sent to the anganwadi centres as per the agreement.

Fuel expenses of 40 paisa per worker should be raised to rupee one. Anganwadi workers gave warning to the government that if their demands are not accepted they would gherao the Congress ministers and intensify their struggle. Kashmir Kaur, Sukhjinder, Jagdish, Manjit, Rajwinder, Gurdev Kaur, Balveer Yakopur,Gurpal, Manjeet, Harwinder, Anu, Paramjit, Suman Rani,Balveer, Santosh, Balveer Manakpur, Kamaldeep Chadha, Amandeed and other workers and helpers were present on the occasion.