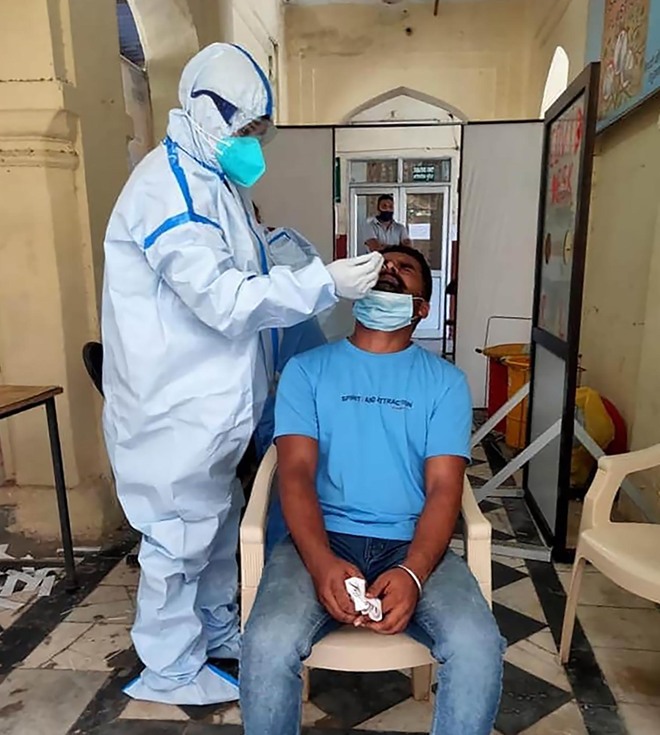 A day after Jalandhar registered a record single-day spike of 365 cases, the number of Covid cases rose to 9,409 on Saturday with 313 more people testing positive for the disease in the district. Tribune Photo: Malkiat Singh

A day after Jalandhar registered a record single-day spike of 365 cases, the number of Covid cases rose to 9,409 on Saturday with 313 more people testing positive for the disease in the district.

It’s the second consecutive day that the district has reported over 300 cases in a day. From 9,096 cases, the district crossed the 9,400 mark in a single day. In the past two days, (365 cases on Friday and 313 on Saturday) the district numbers have had an addition of 678 cases. While 6,462 people have been discharged in the district so far, the deceased tally increased to 248 with nine more deaths on Saturday. 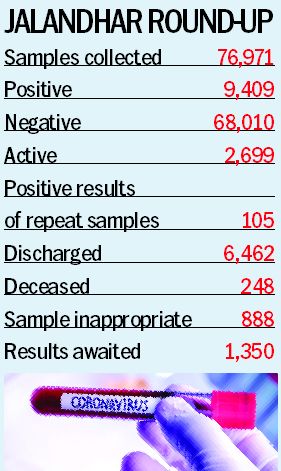 Three days after a member of a family died of a heart attack at a Jalandhar-based colony, health teams on Saturday sampled 35 people (rapid tests) in the area of whom one person came out positive. Notably, the deceased who was more than 50-year-old had complained of breathlessness and also had fever a week ago, which resulted in a sampling drive being held at the colony.

Although as per the family, since the man was tested negative for Covid, none got the Covid test done on Saturday. His demise and last rites were heavily attended and over 300 people went to visit the family. While his family has 25 members, none got a Covid test done when the health teams visited.

The victim’s brother told The Tribune: “My brother was taken to the hospital after he complained of breathlessness. He was treated by doctors and died around 9 pm. His test was conducted, but it came out negative. Our family is big, but we are all fine. So, we did not get our test conducted.”

The one person in the area who tested positive is a labourer who lives near the colony.

The number of positive patients increased to 2,746 in the district with 125 people testing positive for Covid on Saturday. With the death of six patients, the death toll also rose to 82.

Civil Surgeon Dr Jasvir Singh said the total number of samples taken so far has reached 75,544 with 1,511 new samples taken on Saturday with suspected flu-like symptoms. According to reports received from the lab, 71,335 samples were negative, while 1,786 reports were awaited and 108 samples are invalid. The number of active cases in the district is 896 and 1,766 patients have recovered so far. Dr Singh said of the six Covid patients who died on Saturday, a 55-year-old woman of Ahirana Khurd died while on the way to a Jalandhar hospital. Apart from this, four patients died in private hospitals in Jalandhar, while a 52-year-old man died in Civil Hospital Dasuya.