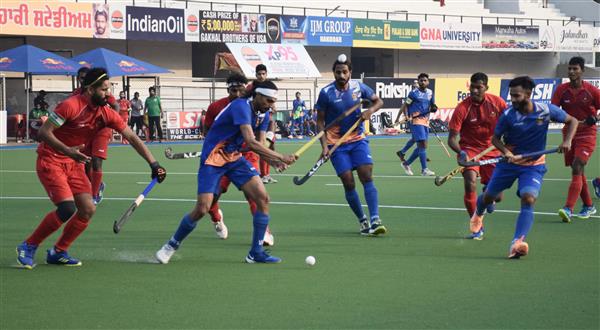 Players in action during the 39th Surjit Hockey Tournament in Jalandhar on Friday. Malkiat Singh

Army XI beat Punjab & Sind Bank by 3-1 in the league match and earned three points in pool B on the second day of Surjit Hockey Tournament at Olympian Surjit Hockey Stadium here on Friday. In another league match in Pool A, Indian Air Force beat Indian Railways by 3-1 to earn three points. ASC Bangaluru and Indian Navy entered the league stage after winning their respective matches.

In league stage in Pool B Punjab & Sind Bank and Army XI displayed fast hockey. In the 6th minute Armymen took lead when their player Sarin E converted penalty corner (1-0). In the 7th minute Bank team equalised, their Jarmanjeet Singh netted the ball of penalty corner (1-1). At half time both teams were locked at 1-1. In the fourth quarter’s 54th minute Army’s Jagjoth Singh scored from the right flank (2-1). In the 58th minute, Army’s Pratap Shinde completed thse tally (3-1).

In the first match of the day, ASC Bengaluru beat CAG New Delhi by 1-0. In the 28th minute of the game, Gurpreet Singh, skipper of the ASC sounded the board by converting their first penalty corner.

The second clash of the day was played between Indian Navy Mumbai and Army (Green) in which both the teams displayed excellent and fast-paced hockey. Both the teams scored 3-3 in the stipulated time of the match while Sushil Dhanwar of Army failed to convert the penalty stroke into a goal in last minute of the game. In the stipulated time, Nitesh, Sushil Dhanwar and Sushil of Indian Navy Mumbai and Simerandeep Singh, Milin Topo and Jobanpreet Singh of Army (Green) scored 3 goals each and finally the Indian Navy defeated Army Green through penalty shoots by 7-5.

In league stage match of pool-A Indian Air Force, Mumbai, defeated last year’s champion Indian Railways, Delhi by 3-1. In the 30 minute, deep defender Parmpreet Singh of railmen converted the panality in goal to ahead his team. At half time, railmen were leading by 1-0. After half-time,in the 42 minute Airmen showed a good game & their captain Lovepreet Singh converted the penalty stroke in goal to level da score 1-1 but the joy of the Airmen was short lived when railway forward Jaginder Singh scored a brilliant field goal with a solo effort to ahead his team again (2-1).

After half-time, Air Force showed a good game and their captain Lovepreet Singh scored a penalty stroke in the 42nd minute of the game to make their team equal 1-1. In the 46 minute, Maneed Kerkata scored a brilliant field goal to make the score 2-1. In the last minute of the game, Rahul Kumar scored a brilliant field goal with a solo effort to give the Air Force team a 3-1 win.